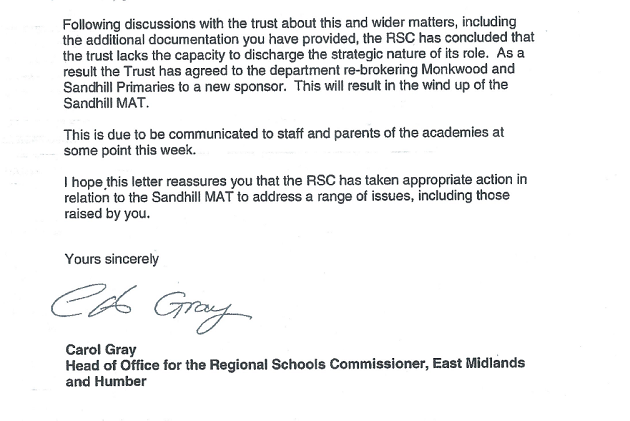 An academy trust which ‘misled’ parents over government intervention in SATs testing is to close and have its two remaining schools transferred to a new sponsor.

Regional schools commissioner (RSC) Jennifer Bexon-Smith has ruled that Sandhill Multi Academy Trust “lacks the capacity to discharge the strategic nature of its role” after complaints about its handling of this year’s standardised tests at Brookfield Primary School, South Yorkshire.

In a letter to an unnamed complainant, the office of the RSC for the East Midlands and the Humber agreed claims by the trust that it had requested interventions undertaken by the Standards and Testing Agency in this year’s SATs were “misleading”.

The letter confirmed the trust will be “wound up” and new sponsors found for Sandhill Primary Academy and Monkwood Primary Academy. Brookfield Primary passed to the Wakefield City Academies Trust in August.

The decision follows complaints from an unnamed source that the trust had kept parents in the dark about increased monitoring of the SATs at Brookfield this year. The school first knew about the plans on March 2 but did not inform parents until May 8, four days after it was revealed in the regional press.

In a letter to the complainant, Ms Bexon-Smith’s head of office Carol Gray said although the pre-election “purdah” period, which prevented publication of certain information between Marcy 27 to May 8, had “limited the window” in which the trust could inform parents and staff, it had still had several weeks to do so before the period began.

Ms Gray also said that a statement issued by the trust to the Yorkshire Post and the Rotherham Advertiser which claimed STA officials were invigilating “at the trust’s request” was “clearly misleading”.

A Department for Education spokesperson said: “Academies and free schools operate under a strict system of oversight and accountability – more robust than in council-run schools — which means any issues are identified and swift action can be taken.”

The trust and Brookfield were both approached for comment.