The government published data last week showing how the eight regional schools commissioners are performing, three years after the posts were set up.

Schools Week has crunched the stats to bring you our annual RSC league tables. 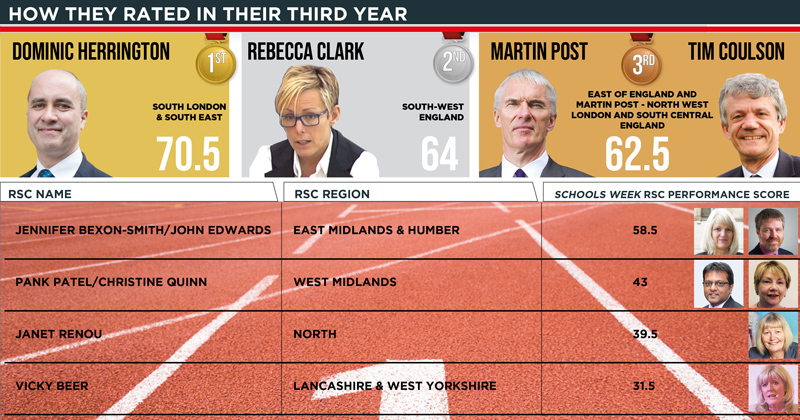 Dominic Herrington has been crowned the top performing RSC for the second year in a row, according to Schools Week’s latest league table analysis.

A new set of performance indicators were used to judge the commissioners’ work in 2016-17, the third year since the posts were established.

Schools Week crunched the data published in the latest academy sector annual report and accounts to show how the RSCs measured up in each category (see below) – and who did best overall.

As in 2015-16, Herrington, the commissioner for south London and the south east of England, came out on top. He has been the RSC for his region since July 2014 and is also the interim national schools commissioner.

Second place went to Rebecca Clark, who was replaced as the RSC for the south west by Lisa Mannall at the end of July last year.

In our analysis last year Post, who has held his role since August 2014, was third, with Coulson one spot behind him.

Coulson resigned to become the new chief executive of the Samuel Ward Academy Trust in west Suffolk and was replaced by Sue Baldwin in August last year.

The fortunes of Janet Renou in the north of England improved a little in 2016-17, bringing her up one slot from last place.

Vicky Beer, the RSC for Lancashire and west Yorkshire, fell from fifth in 2015-16 to bottom.

Beer, who has been the commissioner in her region since November 2015, scored 31.5 points, eight points fewer than Renou, who became as RSC in September 2014.

Fourth and fifth place went to regions whose commissioners changed mid-year: John Edwards replaced Jennifer Bexon-Smith in East Midlands and the Humber in May last year; Christine Quinn took over from Pank Patel in the West Midlands in October 2016.

The eight RSCs have a range of powers devolved from the education secretary, including converting underperforming schools into academies and deciding whether trusts can expand.

Last year was the first time the Department for Education voluntarily published information on their performance, following a successful campaign by Schools Week for more transparency. Before this we created our RSC league tables using data gathered from Freedom of Information requests.

We awarded the commissioners a score out of eight for each of the key performance indicators (KPIs). Some indicators were split into sections, meaning RSCs got more than one score for that measure.

The top scorers got eight points, the second seven, down to the worst performers who got one point. In the case of a draw, a median point score was given. We totted up the scores for their final ranking.

It was not possible to compare with the previous year’s performance, as the KPIs have been changed.

KPI 1i) Time taken for academies, free schools, UTCs and studio schools to move out from below the floor category

Beer and Renou came joint last, both with 1.5 years, while Bexon-Smith/Edwards, Herrington and Clark came joint first with 1.3 years.

Post and Herrington did best with only 2 per cent of their academies (19 each) rated inadequate. Renou had the lowest number at 16 (4 per cent).

Another bad outcome for Beer with 20 per cent (94 academies) at KS2 and 4 below the floor standard within the first three years.

Bexon-Smith/Edwards had the greatest raw number of academies in this category at 117.

KPI 1v) Number and percentage of free schools, academies and sponsored academies that are good or outstanding

This is split into three separate tables – one based solely on free schools, one sponsored academies, and one for all academies.

Renou had the lowest percentage of free schools and sponsored academies rated good or outstanding, at 57 per cent (four schools) and 84 per cent (248 schools) respectively.

Renou and Beer had the joint lowest percentage of all academies with the two top grades, at 80 per cent each (282 and 477 academies respectively).

Patel/Quinn scored lowest here, with 84 per cent of council schools opened as converter academies within 12 months of receiving an academy order (112 schools).

Renou came top with 100 per cent of her LA schools (54) hitting the target.

KPI 3) Number and percentage of LA-maintained schools opened as new sponsored academies within nine months of an inadequate rating, broken down by:

Patel/Quinn came last with only 21 per cent of their inadequate LA-maintained schools opening as sponsored academies within nine months (four of 19). Clark came top with 63 per cent (five schools out of eight).

Renou came last in this section with zero and Herrington came top with 100 per cent (four out of four).

Bexon-Smith/Edwards had the highest number of schools (12).

KPI 4i) Number and percentage of schools in a multi-academy trust, as at September 21, 2017

Post did worst here, with 68 per cent of his schools in a MAT (667 schools). However, Renou had the fewest schools in trusts at 321.

Coulson did best with 84 per cent of his schools in a MAT (796 schools), while Bexon-Smith/Edwards had the greatest number of schools at 835.

KPI 4ii) Number and percentage of MATs open for three years and over, that have three or fewer schools, as at September 21, 2017

Renou did worst with 66 per cent of her MATs (53) open for three years or more having only three schools or fewer. Bexon-Smith/Edwards did best with 40 per cent.

The budgets received by each of the eight regional schools commissioners (RSCs) this year varied by almost £600,000, new figures have revealed.

Workforce budgets ranged from £1.52 million in the southwest of England, overseen by Lisa Mannall, down to £950,000 in northeast London and the east of England, headed by Sue Baldwin.

The figures also show that more schools does not mean more money. John Edwards, the RSC for East Midlands and the Humber, has 1,239 (the most of any RSC), but received £1.25 million this year – £270,000 less that Mannall, who manages 55 fewer schools.

When the budgets are divided by their number of schools, Renou comes out on top, with nearly £2,000 for each of her schools. Baldwin is at the bottom with only £835.53 for each school.

The data also revealed varying numbers of staff in each RSC’s department. In September, Vicky Beer in Lancashire and West Yorkshire had the most full-time equivalent staff members at 65. She also had the second highest workforce budget at £1.40 million.

When each RSC’s workforce budget is divided by employees, Mannall has the most at nearly £27,500 for each staff member, while Baldwin has the least, at just over £18,000.

The information was released in an answer to a parliamentary written question from Stephanie Peacock, a former teacher and MP for Barnsley East, who said the “soaring costs” of the RSCs were another consequence of the “inefficient and fragmented schools system”.

According to Lord Nash, the former academies minister, the commissioners’ budgets are made up of a “programme budget” to cover “events and other communications activities”, and an “administration budget” for staff costs, such as salary and travel. On top of this each RSC has a headteacher board budget, which is used to recompense board members for their time.

The cost of the RSCs has been an ongoing source of concern, ballooning from £4 million in 2014-15, to about £30 million. Last year Mary Bousted, the joint general secretary of the National Education Union, said the climbing costs called into question whether the RSC network was “fit for purpose”.

A Department for Education spokesperson said: “Workforce budgets are set relative to our assessment of the needs of each region. They are monitored and reviewed and can change in-year.”