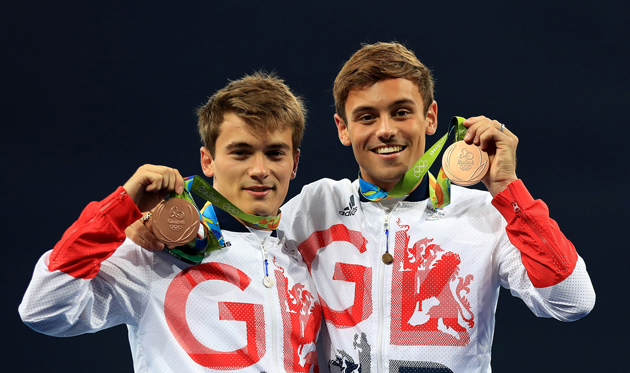 Proud teachers and their schools have heaped praise on former pupils who have contributed to a record medal haul for Team GB at this year’s Rio Olympics.

Overall, just under 70 per cent of the medal-winning athletes were educated at state-maintained schools. A handful of athletes, including Tom Daley, the diver, were given scholarships to attend independent schools.

Sutton Trust figures from the 2012 London Olympics revealed more than a third (36 per cent) of British medal winners attended a private school, despite those schools only educating 7 per cent of pupils. However, that proportion has decreased since 2012, and Schools Week analysis shows 32 per cent of medal-winning athletes were educated at independent schools.

Sir Peter Lampl, chair of the Sutton Trust and of the Education Endowment, said today: “The success of Team GB in Rio has been a national triumph. It’s been fantastic to see a growing number of our national heroes coming from comprehensive and other state schools.

“But alumni of private schools are still over-represented among our medalists. Although some state schools have improved support for competitive sport over the last decade, they’re still more likely to benefit from ample time set aside for sport, excellent sporting facilities and highly qualified coaches.”

Schools Week has also reported on figures from the Independent Schools Council that show private schools have almost as many swimming pools between them as the whole of the state school, higher education and further education sectors combined.

But the winners appear to buck the trend. See below for a full breakdown of the type of school medal winners attended.

Schools Week has put together a full round-up of their schooling history. Medalists with multiple medals are listed under the day they won their first medal. The 21-year-old beat his own World Record to win gold on day 2 of the Olympics.

Born in Uttoxeter, Staffordshire, he attended Painsley Catholic college, a Roman Catholic academy, and then Derby college, an FE provider.

Painsley posted on its website: “Many congratulations to Adam Peaty – our first Olympic Gold!! What a fantastic swim from our former student!!”

Painsley boasts a number of other sportspeople in its alumni, including lower league footballers Adam Yates and Gareth Owen.

Born in Swindon, the 25-year-old moved to Swansea, Wales, ten years ago. She previously attended Royal Wootton Bassett academy, in Swindon, which was rated outstanding by Ofsted in 2013, and now operates in a standalone academy trust.

The 25-year-old missed out on the opportunity to compete in London 2012 because of illness.

In an interview with the Swindon Advertiser about Carlin’s win, the school’s chair of governors Marion Sweet said: “We are tremendously proud. I was absolutely desperate for her to get a medal.”

Sweet said Carlin was an “inspiration” to current pupils.

The duo (pictured above) came third in the synchronised diving, after a tense battle for the spot. It was their first competition and medal as a pair.

Goodfellow, 19, attended Melbourn Village college in Cambridgeshire until he moved to Plymouth. The school is now part of the Comberton academy trust.

Daley, 22, who became a supporter of ChildLine when he was 13, has spoken out about bullying he endured when he was at Eggbuckland community college after he competed in his first Olympics, in Beijing in 2008.

His father withdrew him from the school, and he was given a “very significant scholarship” at Plymouth College, an independent school, where he sat his GCSEs and A-levels. The school is partnered with Plymouth Leander swimming club and has produced a number of Olympic and world medallists.

Daley will have a chance to secure another medal when he competes in the individual diving event later in the competition.

The 33-year-old from Somerset, attended community school Court Fields.  The school, in Wellington, became a sponsored academy after a 2013 Ofsted report said it required improvement.

Another athlete from Somerset. O’Connor attended Ralph Allen school a comprehensive in Bath.

Hearing of her win, the school tweeted:

A massive well done to ex-student @SiobhanMOConnor on silver! Proud of you!Students can learn from your hard work. https://t.co/NI48bSScA3

Guy, 20, who was born in Bury, received a scholarship from the prestigious Millfield School when he was 13, and moved to Somerset to attend the school.

Froome wasn’t educated in the UK, growing up in Kenya and then South Africa. He attended two independent schools, St Andrew’s and St John’s college, both in South Africa.

Another water-based Olympian from Staffordshire – joining Adam Peaty in winning a gold medal.

The 29-year-old, from Bristol, went to a state school – Marlwood school.

Both state educated, Laugher attended Ripon grammar school, a selective school in Yorkshire, and Mears went to The Willink school in Reading.

Well done, Katherine. Fantastic result Proof that you can really make dreams come true. We're so proud of you.

Kenny went to Mount St Joseph school in Farnworth, Manchester. He has previously praised the support he had at the school from his PE teachers.

Hindes holds dual nationality with Germany, having a  German father. He grew up in Germany, attending a specialist sports college called Heinrich Heine Gymnasium, which boasts a number of athletes in its alumni.

Hounslow grew up in Harrow, London, and went to Rooks Heath high school and then Harrow college.

Seven of the 12-strong team went to a state school, they are:

Those who attended an independent school are: Glover and Stanning singing the national anthem on the medal podium

Glover attended Humphry Davy School, a comprehensive in Penzance, before winning a scholarship to Millfield independent school for her sporting ability.

Stanning attended independent school Gordonstoun school in Scotland, where she was head girl in her final year.

Dujardin attended Van Dyke’s school, an academy in Leighton Buzzard, although she said she constantly missed lessons to go riding.

Clancy, whose mum is a primary school teacher in Gloucestershire, attended Shelley High school, a comprehensive in Huddersfield.

According to analysis by the Good Schools Guide, five of the women went to independent schools and three went to state schools.

According to the same analysis, six of the men went to state schools with three being educated in private schools.

Trott attended Turnford school, a comprehensive in Hertfordshire, which turned into an academy last year and renamed Haileybury Turnford. It is now sponsored by Haileybury and Imperial Service college, an independent school in Hertford.

Rowsell-Shand was first spotted by the British Cycling Apprentice Programme after being tested at her school – Nonsuch high school, an all-girl’s grammar school, in Surrey.

Barker is the daughter of a teacher and attended Llanishen High School, in Cardiff. Archibald is the only rider who attended an independent school, The Glasgow Academy.

Farah, who moved from Djibouti to England aged eight, attended Isleworth and Syon school and later Feltham community college. Farah credits his old PE teacher, Alan Watkinson, for introducing him to athletics, “if it wasn’t for him I don’t think I would be running”.

Ennis-Hill attended state school King Ecgbert in Sheffield, and stayed on in the sixth form to study her A-levels. England cricketer Joe Root also attended the school and was in his first year when Ennis-Hill was in her final year. Murray attended Dunblane high school, a state school in Perthshire, Scotland, before he moved to the Schiller International School in Barcelona, Spain, at the age of 15. The private school cost £40,000 for his 18-month stay at the tennis academy.

Cavendish went to Ballakermeen high, a comprehensive school in Douglas, on the Isle of Man.

Scott attended Sharnbrook Upper School, a state school in Bedford. It is one of the only schools in the country that uses vertical tutoring – where each tutor group has pupils from every year group.

Tinkler attends Durham high school for girls, an independent school. It’s a busy few weeks for the 16-year-old, who is set to find out her GCSE results next week.

Wilson went to Pudsey Grangefield School, a state school in west Yorkshire. After Wilson’s success, the school tweeted: “Huge congratulations from us all to Nile. We are all so proud to have an Olympic bronze medallist as one of our former students!”

Ellis is another Yorkshire medallist, he attended Colne Valley high, a state school in Huddersfield, while Langridge went to Therfield school, in Surrey.

The Brownlees both attended Bradford grammar school, an independent school in Yorkshire. Headmaster Simon Hinchliffe said: “Words cannot express how thrilled and proud we are that two former Bradford Grammar School pupils have won a brilliant Olympic triathlon gold and silver in Rio.

“Alistair and Jonny show a wonderful drive and commitment to excellence that started during their time at Bradford Grammar.”

They are off – a special moment as former pupils, the Brownlees, bid for #Olympic #triathlon glory! Go @TeamGB! pic.twitter.com/k4ZDhuKogp

Skelton went to independent school Bablake in Coventry – one of the oldest schools in the country.

The 16-strong team is evenly split between state and independent schools, although state grammar schools appear to be more represented in this sport than in aforementioned sports.

Sam Quek – Birkenhead high school for girls (an independent school at the time Quek was there, but which in 2010 converted to academy status) and Calday Grange grammar school

All four women went to state schools, with just one (Asher-Smith) attending a grammar school

Born in Leeds, Adams, the world’s first female Olympic boxing champion, attended Agnes Stewart Church of England school in the city before going on to Hopwood Hall college, an FE provider in Rochdale.

And the final medal goes to….

Joyce’s state school – Ernest Bevin college in Tooting – is a heavyweight when it comes to former pupils. The school was named after trade union leader and Labour politician Ernest Bevin (not to be confused with fellow Labour MP Nye Bevan, the founder of the NHS).

It is also where London mayor Sadiq Khan went to school, and has many sportsmen in its alumni, including snooker player Jimmy White and professional basketball player Eric Boateng.

The school is a specialist school for sport.