Eleven UK school teachers have been honoured as winners of the 2019 Pearson Teaching Awards, for their inspirational work in education.

The winners received their awards, which recognise “inspirational teachers”, at a glamorous ceremony this evening hosted by BBC presenters Tina Daheley and Sean Fletcher. The ceremony, at the Roundhouse in Camden, will be broadcast on BBC2 on Saturday, October 26, as “Britain’s Classroom Heroes”.

Now in their 21st year, the Pearson Teaching Awards celebrate the best teaching across the UK, and gold winners are nominated for awards by pupils, parents and colleagues. 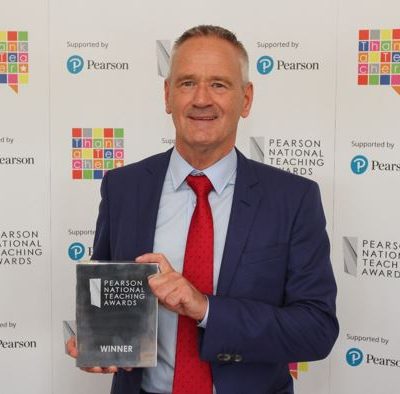 Judges said he is a “dedicated, passionate and skilled headteacher who has devoted much of his life to ensuring the young people in his care achieve the best possible outcomes.”

Keith places great importance on staff development, and his ability to ‘talent spot’ colleagues. One member of the school leadership team was a welfare assistant when Keith saw her potential and encouraged her to pursue a teaching qualification, starting her on the journey to leadership.

Primary school of the year 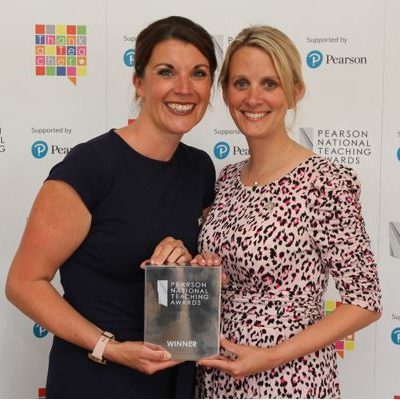 Delph Side is located in Skelmersdale, near Liverpool, one of the most deprived areas in the country which has left the school facing challenges including high crime rates and low aspirations.

The school’s therapy dog Poppy is there to help pupils who have faced trauma and challenges in their lives.

Delph Side’s results have improved rapidly in the last three years, and the school also encourages pupils to be social activists and work to make their local community better.

Secondary school of the year 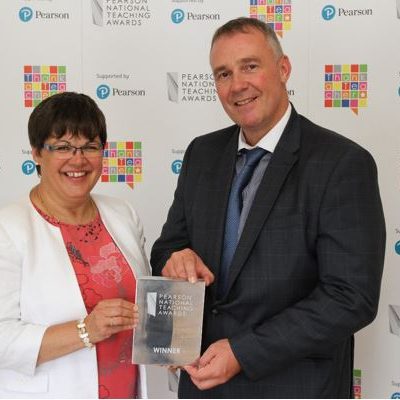 Carlton Bolling, located in one of the most deprived communities in Bradford, was once described as “arguably the most broken in Britain” due to its association with the Trojan Horse scandal. However, it has since turned its fortunes around, and was rated ‘outstanding’ by Ofsted just two years after being put in special measures.

The school has been entirely rebuilt over the past few years, and awarded the World Class Schools Quality Mark for offering unique work experience, access to peer support and cultural opportunities to take pupils beyond the local community. 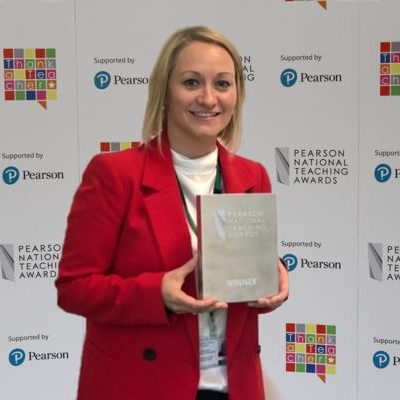 Judges said Lisamaria is “on a mission” to ensure “everyone in the community knows she is invested in them, and they can make a difference”.

Staff and pupils say she creates a warm, nurturing environment that supports every child to  be their best.

Her impact also goes beyond St Ninian’s, as she supports other headteachers as they come to terms with the role and helps them reach their potential.

Lisamaria is also a big part of the local community, including transporting shopping to stuck families during the winter snows and organising a ‘parent boot camp’ to get families into shape. 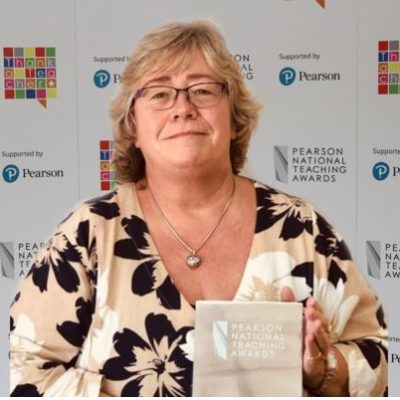 Rhian has spent the last 30 years at the school, taking on headship in 2010.

Judges said under Rhian’s tenure the school as gone from strength to strength, but remained rooted in the community with a strong sense of Welsh identity.

Rhian’s impact can also be seen by the number of pupils she has inspired to enter teaching. Her nomination was supported by a local headteacher, who said she was only a headteacher today because of Rhian. In total, there are 24 of her former pupils now working at the school. 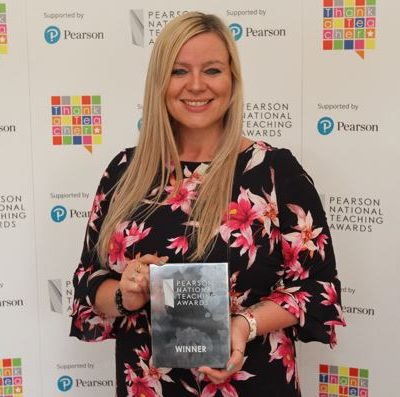 Tina has worked at Barham Primary School for the last six years.

Parents, pupils and colleagues were unanimous in their praise for her and her willingness to go beyond the call of duty, including negotiating free Virgin Trains tickets, taking parents to visit special secondary schools to help their child’s transition after primary school and establishing a morning Yoga mindfulness session for children.

As well as an outstanding teacher, Tina is expert at creating relationships with vulnerable pupils and their parents. 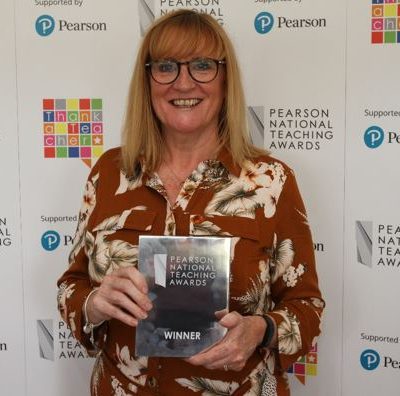 Angela’s focus on bringing real life experience and learning outside the classroom into her teaching has played a vital role in helping her pupils reach high standards.

Angela also places emphasis on nurturing well-being and goes the extra mile to make sure her pupils feel valued.

She also encourages pupils to lead campaigns that will make a positive difference to their community, including stopping cars speeding and reducing litter.

Angela also plays a key role in the school’s highly successful International Schools programme, organising exchange visits with their partner schools in Sri Lanka and France, and is currently leading a county wide project to build relationships with schools in Kenya.

Teacher of the year in a secondary school 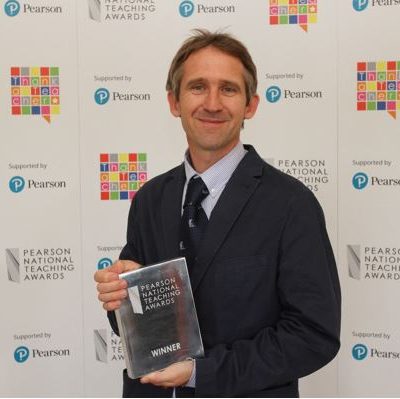 Simon is head of English, and has seen some of the best educational outcomes in the country under his leadership.

Parents, pupils and fellow teachers describe Simon as the most creative teacher they have ever seen, who challenges the thinking of pupils and has high expectations of their learning.

He has taking a leading role in family and community learning initiatives, and sees personal growth as equal to academic success. Staff and pupils alike praise the impact Simon has made on the school and on them, as well his passion for teaching and changing lives. 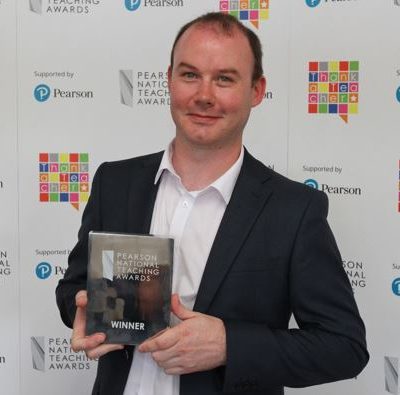 Paul is described as a “true role model” to his pupils, and is dedicated to delivering outstanding intervention sessions to ensure pupils are able to progress in their studies.

He is the first teaching assistant in the history of the school to qualify as a designated safeguarding lead, and ensures pupils are support and confident in their studies.

He also plays an essential role in the process of transitioning to secondary school from primary, so every pupil can thrive from their first day at Selly Park.

Outstanding new teacher of the year 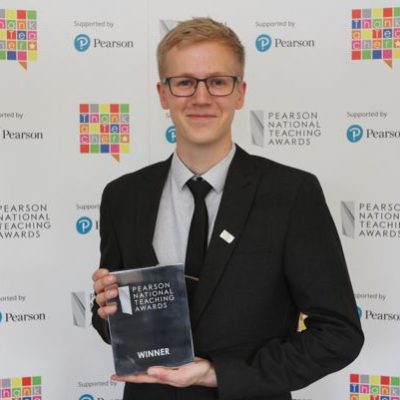 Connor meticulously researches best practice to make sure his teaching is the best it can be, and is recognised as an “exceptionally able teacher”.

He has also excelled as the school’s computing lead by creating a robot zoo, coding and building an award-winning marble run linked to the town’s history and training other staff on how to integrate technology into their teaching.

Despite still being at the start of his career, Connor presented at the PGCSE initial teacher training cohort, the Diocesan NQT training, to Coventry Catholic senior leaders and to the Catholic Education Service executive leadership formation delegates.

He has developed a range of resources to help his peers deliver computing teaching, and shared these beyond the school so as many pupils as possible benefit from his expertise.

Digital innovator of the year 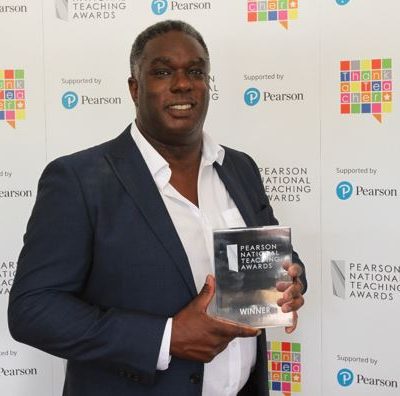 Stephen was nominated by his own pupils for his passion for promoting and using digital technology across East Barnet School, where he was once a pupil himself.

He has introduced digital solutions to help teachers share resources and pupils learn better, and established a new robots department at the school.

Judges said his pupils leave East Barnet School with an “incredible level of subject knowledge, to the point where many of them are fast-tracked through their first year at university because their knowledge and skills easily surpass their counterparts.”

Stephen also strives for diversity and equality in STEM and has championed female representation in his subjects. His efforts have seen a significant increase in the number of female pupils taking Design and Technology and Engineering at GCSE and A-level.