Rural schools are fighting for their lives as new figures show they made up 40 per cent of school closures in the past decade, up from 20 per cent in the decade before.

Since January 1 2000, 654 schools have closed without being replaced, 183 of them in rural areas, according to data from the Department for Education.

Small schools are vital in a community. They keep a community alive. Without them rural communities will just become places for older people

Barbara Taylor, the secretary of the National Association of Small Schools and chair of governors at a school with 49 pupils in south Oxfordshire, said small schools were having to “really, really fight” for survival in a time of ever-tightening budgets.

“You’ve got to get the councillors, MP, everyone involved. It is increasingly difficult to win.

“Small schools are vital in a community. They keep a community alive. Without them rural communities will just become places for older people.” 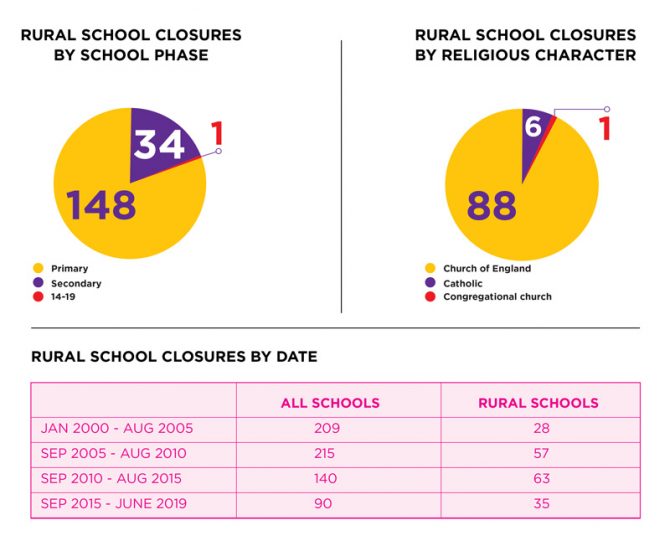 Last year, the Church of England revealed that it was considering closing some of its smallest schools. It oversees 70 per cent of the country’s “very small” schools with fewer than 110 pupils, but has struggled with tight budgets, building maintenance and teacher supply.

Almost half the rural schools that closed without replacement since January 2000 were Church of England schools (88), while six were Catholic.

A spokesperson for the Church of England said an “overarching strategy” is needed for countryside communities.

“Over the past 200 years, Church of England schools have adapted to significant changes in society and we are confident they will continue as rich expressions of their communities long into the future.”

Nineteen schools closed in Northumberland, the highest numbers in the country, followed by North Yorkshire with 16 and Suffolk with 13.

Stephen Tierney, the chair of the Headteacher’s Roundtable, said a “political decision” was needed to support small rural schools. They should be given more funding – even if it meant schools in urban areas had lower levels of funding as a result – to provide the “entitlement to education for all children”.

Rural schools are eligible for government “sparsity” funding of up to £25,000 for primaries and £65,000 for secondaries.

But Carl Les, the leader of North Yorkshire County Council and spokesperson for education and children’s services at the County Councils Network (CCN), warned the money was “insufficient” to cover the “unique funding challenges”.

According to CCN, more than 20,000 pupils in rural England have lost free school transport since 2014 as councils struggled to cope with costs. Rural areas paid an average of £93 a child for transport in 2017, compared with £10 in cities and towns.

Jack Abbott, a Suffolk councillor and the opposition Labour party’s spokesperson for education, said the cuts had “injected further turbulence into the system” and warned the ageing population made it appear “inevitable” the “decline” of rural schools would continue.

“The fabric of rural communities is changing and, sadly, their small schools, already starved of the necessary funding and resources, are unlikely to survive the transition.”

Last summer, the public accounts committee warned rural schools were “unattractive” to multi-academy trusts because they were “financially vulnerable or geographically isolated”.

Since 2010, 1,379 rural primary schools registered an interest in becoming an academy, but just 984 went on to apply for academisation.

The Truro and Penwith Academy Trust runs 28 academies in rural Cornwall. Jenny Blunden, its chief executive, said academy trusts could be a “lifeline for rural schools” and insisted other trusts “shouldn’t shy away from them”.

She said the trust shared staff and workloads across the schools and focused on joint procurement to keep costs down.

“To be completely isolated and standalone would be really challenging right now,” she said.

“It’s really important for the social fabric of Cornwall to keep small schools alive and well, and it’s in the best interest of the children in those schools that they’re not being bussed or taxied a long way every day.”

A spokesperson for the Department for Education said it recognised the “important role that rural schools play in their communities, as well as the specific challenges they face”.

Any school closures must be “in the best interests of overall education provision in the area”.