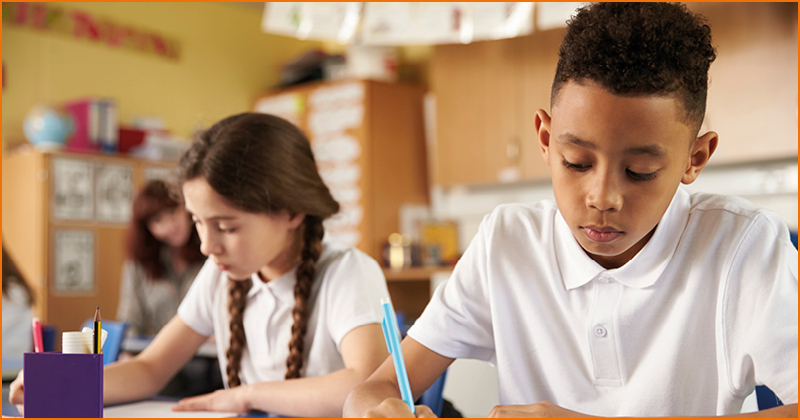 Primary school pupils will no longer lose marks if they write a comma back-to-front, the government has told headteachers after an outcry  over the way SATs were marked two years ago.

The Department for Education has written to primary schools explaining key stage 1 and 2 mark schemes have changed to make clear that examiners will “accept reversed punctuation marks” such as commas and semi-colons.

A panel of experts was put together to review the marking guidance, with the full mark schemes to be released in due course, the DfE told Schools Week.

It follows fury from teachers in 2017 when pupils were marked down in the key stage 2 spelling, punctuation and grammar test for the shape and size of their commas and semi-colons, even though they had inserted them in the correct places.

Michael Tidd, headteacher at Medmerry primary school in west Sussex, tweeted a screenshot of the DfE’s update today, adding the change to the mark schemes represented a “quiet return of sense”.

In the summer of 2017, teachers used the hashtag #SATsshambles to highlight several inconsistencies in key stage 2 SATs marking.

They posted screenshots on social media of papers returned to them which showed pupils were not awarded marks even where they had inserted pairs of commas in the correct place.

Unpublished marking guidance at the time, which teachers were not privy to, said “the comma element of the semi-colon inserted should be correct in relation to the point of origin, height, depth and orientation”.

It added: “The orientation of the comma element of the semi-colon must be inclined to the left or straight down. It cannot incline to the right.”

Other issues included pupils not getting marks if they wrote slightly outside of a box even if the answer was correct.

Teachers blasted the “pedantry” of the requirements and also complained the marking guidance should not be kept secret and they should have been informed of the rules.

It eventually emerged that markers had been given further marking guidance not available to schools, which markers were told to get rid of after use.

Meanwhile the Standards and Testing Agency’s published mark scheme, the one teachers were using, had no such requirements for punctuation to be a certain size and shape.

Pearson, the company that administered the SATs, said it continuously monitored the quality of marking. Pearson was contacted for comment.