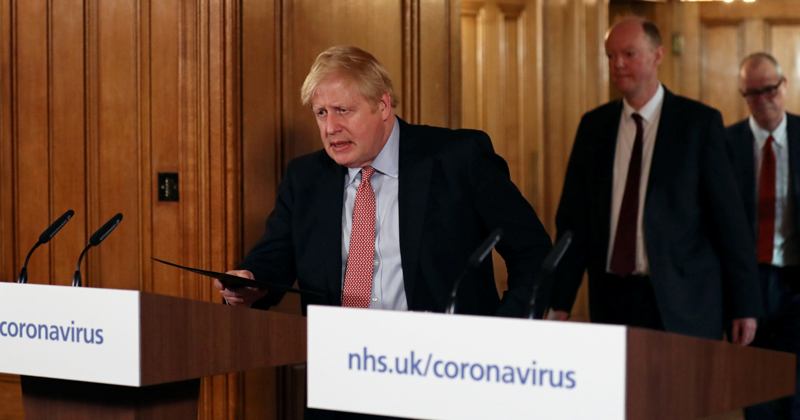 Pupils will no longer wear face masks in school from next week, Boris Johnson has confirmed.

The recommendation that masks be worn in secondary classrooms and by students in communal areas will be lifted from May 17.

However, the rule that staff and other adults wear face coverings in situations where social distancing is not possible, including corridors and communal areas, will remain in place.

The prime minister told a Downing Street briefing that from next Monday, the government “will no longer require face coverings in classrooms, or for students in communal areas in secondary schools and colleges”.

The Department for Education had already said it planned to remove the recommendation in line with step three of the government’s roadmap out of lockdown.

Today, the prime minister confirmed that the next phase of restrictions would be relaxed from Monday.

Masks have been recommended in secondary classrooms since schools reopened more widely on March 8. The government initially said it would review the rule in the Easter holidays, but opted to continue to make the recommendation until May 17 at the earliest.

Earlier this month, unions and scientists called for the recommendation, which has been in place since schools reopened more widely in March, to be extended to June 21 at the earliest. They warned that not doing so would have “consequences” for the health of children and parents.

But the DfE said last week it would be removed “as infection rates continue to decline and our vaccination programme rolls out successfully”.

“Virus transmission in schools continues to drop, with the latest data showing a significant decrease in students and staff testing positive and cases isolated quickly thanks to our twice-weekly rapid testing programme.

“Removing facemasks will hugely improve interactions between teachers and students, while all other school safety measures will remain in place to help keep the virus out of classrooms.”

However, in a consensus statement published last Friday, the government’s Scientific Pandemic Influenza Group on Modelling, Operational sub-group highlighted the “importance of maintaining current mitigation measures in schools, such as testing and mask wearing, in the coming months”.

Geoff Barton, general secretary of the ASCL school leaders’ union, said the government’s decision to relax the rules was “hard to reconcile” with that evidence.

“It is obviously better for communication and learning if masks aren’t required in classrooms, but any decision to this effect must follow the scientific advice, and it is very worrying that the government’s decision appears to contradict the published evidence,” he added.

The move to stage three of the roadmap means overnight stays away from home will be allowed from Monday, and the government has confirmed this includes residential school trips.

However, the DfE is recommending that schools do not plan for international visits to take place “up to and including  September 5, recognising the logistical difficulties that will remain in place this academic year regarding overseas travel with groups of children”.

The position beyond September 5 “will be reviewed in advance of step four”, which is supposed to happen on June 21.

Updated DfE guidance states that for residential trips, bubbles “should be formed from existing school bubbles such that residential visit bubbles only have pupils from a single existing bubble”.

These bubbles should be no larger than 30 children, and schools should “where possible aim to establish smaller bubbles”.

Only teachers and members of staff who are already part of the established school bubble should accompany pupils on the visit, and do not count towards the bubble size. Parents, carers or volunteers should not accompany trips.