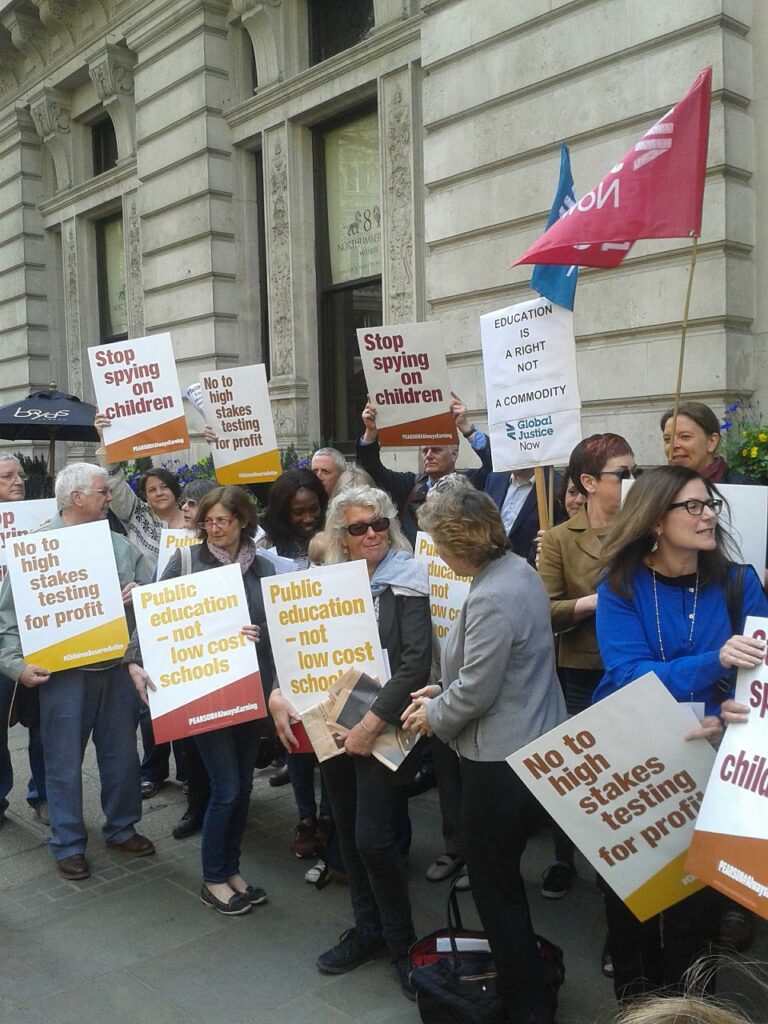 The top boss of London-based education firm Pearson was forced to defend his company’s record on investing in “low-cost” private schools in deprived countries after protesters gatecrashed its annual general meeting today.

Chief executive John Fallon fielded difficult questions in front of shareholders over accusations the firm has turned its back on public education to increase its profits.

It followed protests from teaching unions and global justice NGOs campaigners outside the doors of Pearson’s AGM in central London earlier today.

They accused the firm of making education a commodity by profiting from the creation of low-fee private schools in deprived areas such as Africa and India.

But Mr Fallon told shareholders: “I publicly and enthusiastically support free public education for every child around the world.

“Yet the reality today is this: 65 million primary school-aged children don’t get to go to school, hundreds of millions of secondary school aged kids don’t get to school – and many millions more are still largely illiterate and innumerate.

“If this was health or hunger, we would be talking about an urgent humanitarian crisis.

“Faced with that challenge and reality, we as a leading learning company have a responsibility to work with every part of society, government, local authorities, aid-agencies, charities, and, yes, local entrepreneurs and private companies as well – to give as many people as we can the chance of a better education and a better start in life.”

Campaigners say the firm is making millions by privatising education in the global south. Accounts presented today show Pearson made a £100m this year alone after its £500m acquisition of Brazilian firm English Language Training (ELT).

Randi Weingarten, president of the American Federation of Teachers, said: “We fight this kind of profit making to get kids a good education and fight for governments which gives students a high quality education.”

Its director, Nick Dearden, said: “The money should not be used to fund private schools which compete and undermine public schools in these areas.”

The campaigners also raised concerns over Pearson’s role in fuelling “high stakes testing”, particularly in the US where parents are now starting to pull their children out of taking the exams.

Pearson owns the English exam board Edexcel which offers A level and GCSE examinations.

ATL general secretary Mary Bousted said: “School curricula should not be patented and charged for. Tests should not distort what is taught and how it is assessed.

“Unfortunately, as the profit motive embeds itself in education systems around the world, these fundamental principles come under ever greater threat leading to greater inequality and exclusion for the most disadvantaged children and young people.”

The education company, in a statement, said it supports the principle of fewer and better tests and its focus is on producing assessments which encourage “deep and enriching” learning.