The proportion of A-level pupils reaching the top grades has fallen even further this year, despite prior attainment remaining constant.

Provisional figures released by the Department for Education this morning show that 12.3 per cent of all pupils who sat their A-levels this summer received three A*-A grades or better, compared with 12.5 per cent in summer 2018 and 13 per cent in 2017.

The proportion of pupils achieving an A-A-B when at least two of their subjects are ‘facilitating subjects’ – including maths, further maths, English literature, physics, biology, chemistry, geography, history and languages – has also fallen to 15.8 per cent, down from 15.9 per cent in 2018 and 16.6 per cent in 2017.

However, the average point score per entry for A-level has remained stable as a grade at C+, and the underlying point score has risen slightly to 33.77 from 33.05 last year.

The number of pupils taking A-levels decreased by 5.7 per cent, despite the number of potential 16-18 students in the population decreasing by 1.9 per cent.

The gap between the number of girls and boys taking A-levels grew by 0.01 per cent last year, with girls making up 54.6 per cent of the cohort and boys 45.4 per cent. Although girls continue to start their A-levels with higher prior attainment, they continue to receive fewer top grades than boys.

The achievement of girls has remained stable, with 11.5 per cent awarding three A*-A grades or better, and a small fall from 20.1 per cent to 20 per cent in the proportion achieving A-A-B or better.

But a higher proportion of boys (17.4 per cent) than girls (14.5 per cent) achieved A-A-B or better where at least two of the grades were in facilitating subjects. This compares to rates of 14.4 per cent and 17.8 per cent last year.

Independent schools still have the highest average point score for A-level students at 40.92, or a B grade, but this has fallen slightly from 41.02 last year. The report does say that the controversial iGCSE qualifications – which are disproportionately common in the independent sector and have been accused of being easier to pass – were previously counted and now are not.

The Department for Education noted that “care should also be taken when comparing across institution types due to significant differences in cohort sizes and number of schools”. Just 1,297 UTC students and 354 studio school students took A-levels last year. 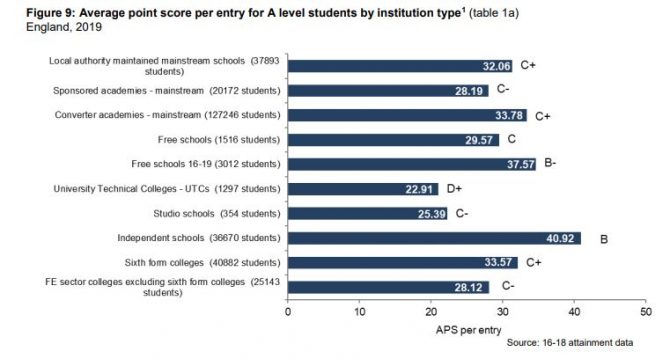 The average among state-funded schools in England stood at 10.2 per cent for three A*-A grades and 17.5 per cent for A-A-B or better. The north east, north west and Yorkshire were all below-average.