The percentage of poorer pupils who are progressing into education, employment or apprenticeships has dropped, destinations data released this morning show.

Only 85 per cent of disadvantaged pupils were in sustained education, or had a job or an apprenticeship after finishing key stage 5 in schools two years ago, which is a one percentage point decrease compared to 2015-16.

That proportion is also five percentage points lower than for all pupils.

The Department for Education released destinations data this morning for the key stage 4 and key stage 5 pupils who finished their schooling in the 2015-16 academic year. It identifies their destinations during 2016-17.

However this year is the first year that apprenticeships have been counted as a destination in their own right, whereas in previous years they were double-counted with other destinations. This means comparing the numbers of pupils across years is not possible.

Overall, 89 per cent of students were in sustained education, employment or apprenticeship destinations after key stage 5, also a one percentage point drop from 2015-16.

The picture was slightly better post-key stage 4. Overall, 94 per cent of pupils were in sustained education, employment or apprenticeships in the year after year 11, unchanged from 2015-16.

Disadvantaged pupils are defined as those who were eligible for free school meals at any point in the previous six years or having been looked after by their local authority. 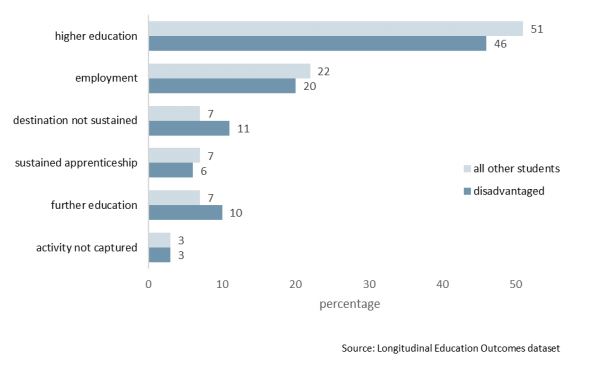