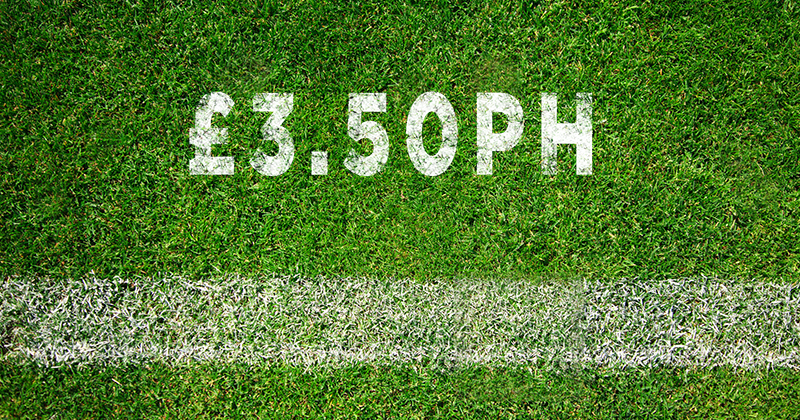 A private school with annual fees of £35,000 is looking to take on a £3.50-an-hour apprentice to tend its grounds, in a move branded “a disgrace” by one of the UK’s largest trade unions for school support staff.

Cheltenham College, an independent coeducational boarding school in Gloucestershire, advertised for an ‘apprentice groundsperson’ on the gov.uk Find an Apprenticeship website with a start date of September 1 this year.

But despite the 175-year-old school charging annual boarding fees of £34,650 for its secondary year groups and £35,595 for sixth formers, it is offering just £3.50 an hour to prospective apprentices who will gain a level two diploma in sports turf in return for their work.

Jon Richards, the head of education at trade union Unison, described the salary as a “disgrace”, telling Schools Week that Cheltenham College should “be embarrassed” with its offer and asked it to “think again”.

“The apprenticeship minimum rate of £3.50 an hour is a disgrace, especially when the government is claiming that apprenticeships are no longer aimed at young workers, but are for all,” he said.

“How many of the school’s privileged pupils will be encouraged to take an apprenticeship when they can see the poverty wages on offer?”

In the last academic year, more than 200,000 young people under 19 took a funded apprenticeship, according to government statistics.

An apprentice taking the training offer at Cheltenham College will work a 39-hour week over two years, according to the gov.uk job advert. The minimum wage for all apprentices under 19, or in their first year of the programme, is £3.50. For those over 21 it is £7.05. There are no rules preventing employers from paying more.

Paying just £3.50 an hour for this type of work makes a mockery of the government’s claim that the apprenticeship route is valued

In the role the apprentice will “prepare surfaces for cricket, rugby, and also maintenance of artificial pitches”, “help the grounds team to keep the college and prep school site to its high standards”, and “learn machinery maintenance and how to operate them”.

Richards said paying just £3.50 an hour for this type of work “makes a mockery of the government’s claim that the apprenticeship route is valued as equally as the academic route”.

Matthew Clements-Wheeler, the deputy head in charge of business management at Bordesley Green Girls School and Sixth Form, said the juxtaposition of “the next leaders of the nation paying £35,000 for their education” alongside “people who’ve taken a vocational route being paid £3.50 an hour” served to highlight “the Cinderella status of some apprenticeships”.

He added: “It does throw it into sharp relief. While people want to be given a foot on the ladder and engage in training – and they could well be earning nothing if they were following an academic route – £3.50 an hour for the opportunity feels low.

“I find it hard to accept that it takes two years before somebody is operating at a level at which they should be remunerated fairly.

“There is a risk of apprenticeships in situations like this being seen as the new internships. You are looking at two years almost indentured servitude.”

He continued: “It wouldn’t take much of [Cheltenham’s] huge fee charges to parents to offer a decent wage to their apprentices and it might open the eyes of some of their pupils that their skills could be better used in a practical rewarding apprenticeship rather than following the treadmill journey to university.”

Dr Alex Peterken, the headmaster of Cheltenham College, told Schools Week that apprentices would be supported to complete their training in 18 months instead of two years if requested.

“The role is advertised in line with government published minimum wage rates in force at the time and is commensurate with other similar posts elsewhere,” he said.