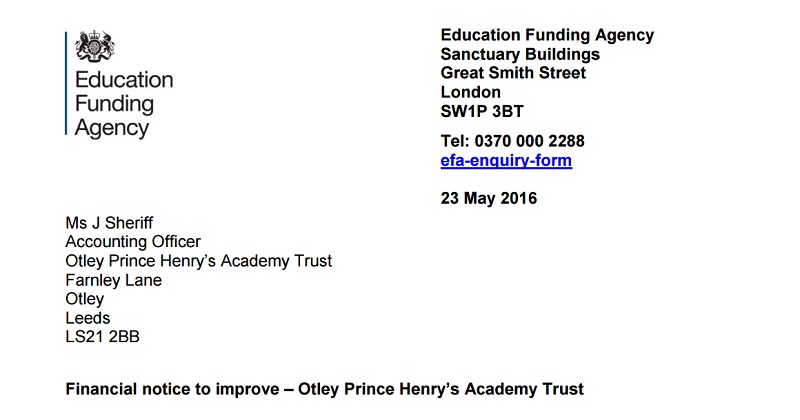 The government has published letters outlining financial concerns at academies in west Yorkshire and Manchester.

The Department for Education has this afternoon published financial notices to improve issued by the Education Funding Agency to the Otley Prince Henry’s Academy Trust and Manchester Creative Studio on May 23, and June 6, respectively.

The notices serve as official warnings about the state of schools’ finances, and also trigger the removal of some spending powers from schools’ boards until their problems are sorted out.

Sue Baldwin, director for academies and maintained schools at the agency, said she had concerns about the “weak financial position and financial management” at Otley Prince Henry’s Academy Trust, which runs Prince Henry’s Grammar School, despite “cooperation and extensive discussions” between the trust and officials.

Baldwin said the trust would have to submit and implement a deficit recovery plan which sets out a balanced budget, appoint an “appropriate” finance director and make other changes in order to get the notice lifted.

Similar finance fears have been raised about Manchester Creative Studio, where the agency has been monitoring progress since bosses first intervened in January.

Although a recovery plan has been submitted, Baldwin raised concerns about the trust’s request within the plan for deferral of a pupil number adjustment repayments and its admission that positive cash flow is “dependent on a donation from an external party”.

She said a financial plan which had been subject to external scrutiny was needed, and urged the trust to improve its pupil number forecasts to avoid pupil number adjustment payments in future years.

“The trust must strengthen the governance arrangements before September 2016 ensuring that there is appropriate financial and educational representation on the governing body,” she said.