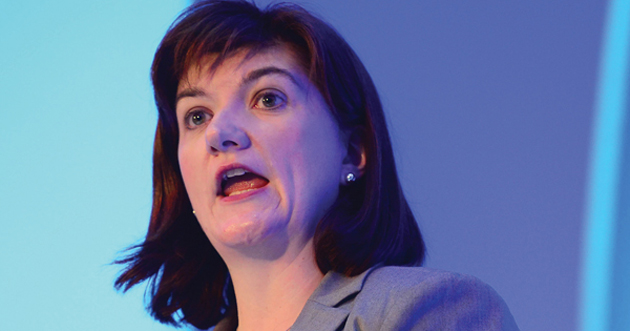 Phonics checks could be brought forward for brighter pupils under a future Conservative-led government, Nicky Morgan has said.

A spokesperson for the education secretary told Schools Week she was going to “go away and look at” whether the controversial checks for six-year-olds could be sat earlier by more able children.

It comes after the question of earlier checks was raised during a Q&A with Ms Morgan (pictured) on the online forum Mumsnet.

One parent, who said her daughter was “bored rigid” working on her phonics for the year 1 check, asked whether some pupils might face the check at the end of reception.

Responding to the Mumsnet user, Ms Morgan said: “The point you raise is an interesting one – we already have resits for pupils who don’t pass the check first time, but perhaps we could look at opportunities for those who are more advanced to take it at an earlier point.”

Speaking to Schools Week on Wednesday, a spokesperson for Ms Morgan said: “[It’s] certainly something we’ll go away and look at, we want to be pushing all kids to reach their full potential and want schools to have the flexibility to do that.”

The check was introduced in 2012. The government has hailed its success and pass rates have risen from 58 per cent in the year of its introduction to 74 per cent in 2014. Teaching unions, however, have criticised the policy.