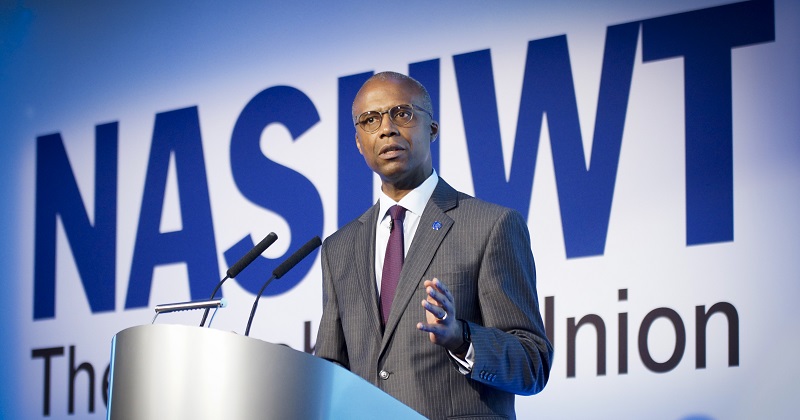 Government must intervene to stop “unacceptable management practices” in schools that are damaging teacher wellbeing during the coronavirus pandemic, the new leader of the NASUWT union has said.

Dr Patrick Roach took charge today of the 300,000-member union after a decade as its deputy general secretary, and immediately demanded action from the government, which he said had been “slow” to recognise the work of teachers on the frontline.

The day to day reality for too many of our members is one in which they are not trusted, in which they’re controlled to within an inch of their lives

Schools across England remain open to provide childcare for only the most vulnerable pupils and the children of crucial workers. But a lack of personal protective equipment and clear guidance has prompted warnings that teachers’ lives are being put at risk.

Roach warned that his members faced a daily reality of “crushing workload, abusive and unacceptable management practices, poor pupil behaviour, [and] verbal abuse and physical abuse by some students”.

It follows warnings from the union and others within the education community that many schools and academy trusts are continuing with things like redundancy processes, and even disciplinary action against teachers.

Roach said his union had received “tens of thousands of enquiries” from teachers voicing concerns about the way the outbreak is being dealt-with in their schools.

NASUWT has provided evidence of “unacceptable management practices” to ministers, and is waiting for them to act.

“What do you do when your employer is saying ‘well actually, you say you’re displaying symptoms of COVID-19 or someone in your household is, but can you prove it?’” said Roach.

“What do you do when you’re a teacher who’s saying ‘I’ve got an underlying health condition’, [and the employer is saying] ‘well you’re still going to have to come into school otherwise we’re going to dock your pay’.”

The outbreak of coronavirus means Roach is assuming the role in a very different way to what he probably envisaged in December.

The union was due to hold its annual conference in Birmingham this week, where he would have delivered a victory speech, but like most major education sector events, the conference has been cancelled.

However, had the conference gone ahead as planned, teacher wellbeing would still have been top of the agenda, Roach said.

The government’s “freedom and flexibilities” agenda, and the fragmentation of the schools sector, have contributed to this issue, Roach says.

He warned that schools faced “one of the worst recruitment and retention crises that we’ve had in generations”.

“So if there’s anything that’s going to be occupying my time, certainly in my first few months, in my first year or two, it will be responding to that agenda.”

Roach remains unconvinced about government pledges to address issues raised by unions, warning it is “nothing new” for the government to indicate it is listening to teachers.

“Some years ago we had the government’s workload challenge. That was about listening to teachers. But actually, workload hasn’t been resolved,” he points out.

He also pointed to the government’s pledge to raise starting salaries, and warned the reality was still a “pay lottery” for teachers.

Relations with staff a ‘priority’

Roach’s election follows a tumultuous period for the union, which admitted last summer that it broke the law in allowing his predecessor Chris Keates to overstay her last term as general secretary.

NASUWT has also been embroiled in a dispute with staff who are in the GMB union over changes to their pensions, which has led to several days of industrial action.

“The NASUWT is committed to good relations with both staff-recognised unions, and will continue to seek to ensure that we can maintain good relations, and that will be a priority for me,” Roach told Schools Week.

“Our workforce is vitally important to the NASUWT, working hand-in-glove with our lay activists and I want that to continue.

“My commitment is ensuring that we have good relations with both of our recognised unions, and I’ll be looking forward to working with them in that spirit.”

Roach wouldn’t comment on the suspensions, but paid tribute to the “great team” at the NASUWT, who “need as much support as possible”.

“They have also rallied behind the national effort to defeat the coronavirus, working night and day to deliver support and assistance to our members when they need it, and I want to pay tribute to the staff who do that.”