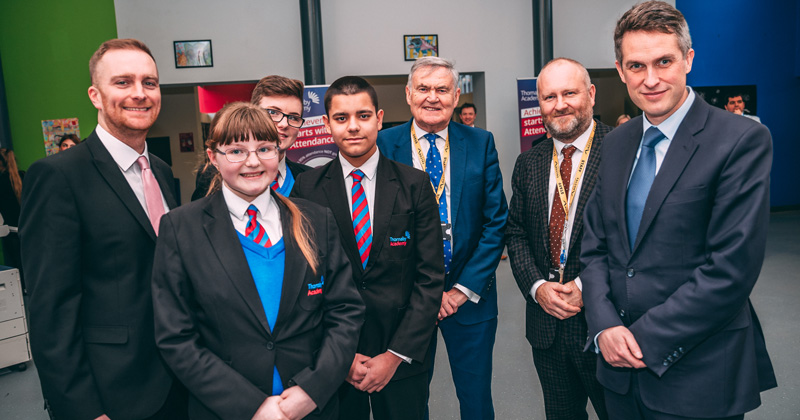 The special academy trust set up by government to take over “orphan” schools has refused to explain why its chief executive has left the role.

Questions surround the departure of Gareth Mason (pictured second from the right above) as chief executive of the Falcon Education Academies Trust.

The trust was set up last year with the support of government to take over schools no one wants (SNOWs) in the north of England.

Schools Week understands Mason has not been seen at the trust for at least two weeks. But a spokesperson for Falcon refused to explain why he has left the role.

They would only say: “Our CEO was on secondment to the trust but this has ended, with the trust led by an interim CEO and director of education.”

Mason being employed via a secondment has not been mentioned before. His appointment to the role doesn’t appear to have been announced publicly at the time, but he has held the position since at least December.

It also appears that a webpage entitled ‘Our Team’ on Falcon’s website has recently been taken down.

Falcon said Mason had been on secondment from the Delta Academies Trust, one of the largest in the country, running 50 schools.

A spokesperson for Delta also refused to answer questions about Mason’s employment. Instead they said: “Delta is providing senior leadership and school improvement support to Falcon Education Academies Trust during its early development. This support is ongoing and a number of senior colleagues continue to work with Falcon in school improvement and leadership roles.”

The disclosure comes as schools minster Nick Gibb was challenged by MPs on the education select committee this week about what he is doing to help “orphan” schools.

Schools Week has long highlighted the plight of such schools – which are given academy orders after poor Ofsted ratings, but are still waiting to be taken over.

The most extreme example is the Hanson School, in Bradford, which has been waiting nine years for a sponsor, after being shunned by three academy trusts. It was rated ‘inadequate’ again earlier this year and has spent six of the past ten years in special measures.

Gibb told MPs there were still “too many” of these schools. He said issues blocking academy sponsorship included deficits and hefty private finance initiatives attached to schools.

But he pointed to the Falcon trust, saying the government had set this up to “take those schools that have not found a home, to sponsor them, to sort out their problems”.

He added that academies minister Baroness Berridge was “absolutely determined that we are going to get those schools into sponsors”.

When asked why Mason had left the role, the Department for Education issued the same statement as Falcon.

The trust is chaired by David Earnshaw, who is also chair of trustees at the Outwood Grange Academies Trust, which has 32 schools across the north of England. Another trustee is Kamruddin Kothia, who is chair of the Star Academies Trust.

When announcing the trust was to be set up in September last year, education secretary Gavin Williamson said it would be run by school leaders with a “proven track record of turning around underperforming schools”. It would be “expected” to take on the “most challenging schools” by “offering a route into a strong academy trust that allows school improvement to begin immediately”.

So far, Falcon has taken on a solitary school, Thornaby Academy, in Stockton-on-Tees, which officially joined the trust in September.

Schools Week can also reveal that the trust has been awarded just over £500,000 to expand as part of the government’s trust capacity fund.

The cash is handed out to help trusts expand before March next year.

A spokesperson for Falcon said the cash will “allow us to ensure good progress at the schools we are supporting now and in the future”.