The Office for National Statistics (ONS) has released its latest Covid-19 infections survey.

These are the key findings for the education sector:

1. Among teachers, infection rates are higher in secondary …

Teachers in secondary schools and sixth forms are more likely to catch Covid-19 than their primary school counterparts.

ONS analysis found between September 2 and October 16, 0.38 per cent of secondary and sixth form teachers tested positive for coronavirus.

In contrast, just 0.23 per cent of primary teachers tested positive during the same period.

The data is based on unweighted estimates of those in teaching testing positive for Covid-19 on nose and throat swabs.

2. …but support staff are more likely to contract the virus

Education support staff, such as kitchen and cleaning staff, were more likely to catch Covid-19 than teachers.

Analysis found that 0.45 per cent of these staff had tested positive between September 2 and October 16, while nursery and pre-school teachers also scored 0.45 per cent.

Teaching assistants are included within the teacher category. 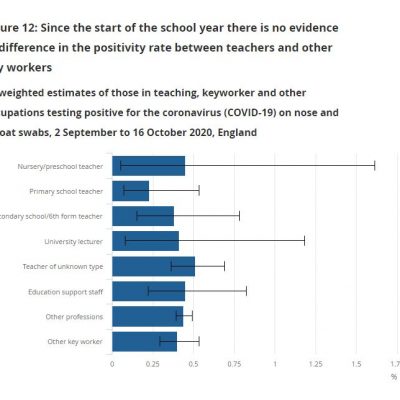 The analysis states there is “no evidence of differences in the positivity rate between primary and secondary school teachers, other key workers and other professions”.

During the same period 0.4 per cent of other key workers, including resident facing care-home workers, patient-facing and no patient facing healthcare workers and protective service occupants, tested positive for Covid.

While 0.44 per cent of workings in ‘other professions’ tested positive.

4. Rate slowed among secondary-school aged pupils during half term …

ONS found in recent weeks there has been increased infection rates in all age groups, “except among older teenagers and young adults where rates appear to be levelling off”.

Between Friday, October 23 and October 30, the percentage of Year 7 to Year 11 pupils testing positive for Covid fell from 1.72 per cent to 1.59 per cent.

The National Education Union, which is leading a campaign to close schools during the lockdown, has used the figures claim “this confirms the role of schools in the transmission of the virus”.

5. … but ONS has warned against drawing conclusions

It is difficult to establish if the shut down of schools for half-term played a role in this drop: the ONS warned against drawing conclusions, stating: “Caution should be taken in over-interpreting small movements in the narrower age groups which have wider credible intervals.”

Meanwhile the percentage of infection among children aged between 2 and those in Year 6 increased during the same week – from 0.87 per cent to 1.14 per cent.