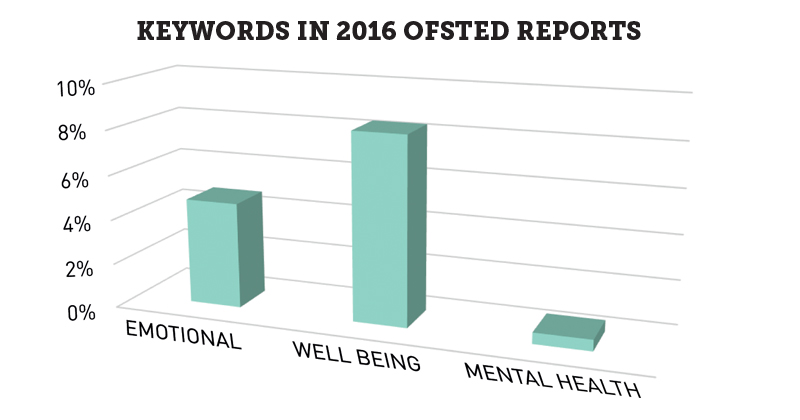 Ofsted inspectors are identifying good mental health provision in schools more often than poor, according to exclusive analysis by Watchsted and Schools Week, calling into question Ofsted’s claims that it is identifying both equally.

Additional mental health criteria were added to the Ofsted framework in September last year, but a recent report by think tank IPPR said mental health and well-being keywords have been mentioned in just one third of inspection reports since then.

The group called for inspectors to do more to assess mental health provision.

But Ofsted said there were no specific requirements for inspectors to report on mental health, but they would do so when provision was particularly poor or good.

In the 806 reports published since January, “well-being”, and “emotional” or “mental health” were mentioned in 21 per cent of summaries and key recommendations for outstanding schools, but in only 11 per cent of requires improvement and 14 per cent of inadequate reports. In most cases, the references related generally to well-being, with the term “mental health” appearing in only four reports.

And even in reports of schools rated requires improvement, the provisions highlighted are overwhelmingly positive.

Sarah Brennan, chief executive of the mental health charity YoungMinds, told Schools Week: “While no one wants to add to the burdens teachers face, it’s crucial that schools are accountable for the mental health of their pupils”.

She added that interventions were “of little use” if the inspection framework encouraged schools to treat wellbeing as “an optional extra”.

An Ofsted spokesperson said that school inspectors evaluated the experience of individual pupils and groups of pupils, including those with mental health needs.

There was no “specific requirement” for inspectors to report on this area, but they did so when there was a “cause for concern, or if the school is particularly skilled in supporting pupils with these needs”.

Craig Thorley, IPPR research fellow, said it was “worrying” that two thirds of Ofsted reports made no mention of mental health provision.

“We know that Ofsted can help to drive changes to school behaviour. If mental health provision is routinely reported, it will help to ensure that pupils who need mental health support do not go under the radar.”

The Ofsted inspection criteria include two specific mentions of emotional and mental health or well-being, one in each of the “outstanding” and “good” categories.

But neither the requires improvement nor inadequate categories specifically mention mental health provision. Those descriptors reference “pupils’ personal development and welfare” and their having “healthy, positive” physical and emotional lives.

Ofsted declined to discuss how the criteria were created.

To conduct the analysis, Schools Week used Watchsted’s database of report summaries and key recommendations of all this year’s reports to run a search for the words: “well-being”, “wellbeing”, “emotional” and “mental health”. Each of the identified reports was checked manually on the Ofsted website and the context of the mention (positive or negative) noted.