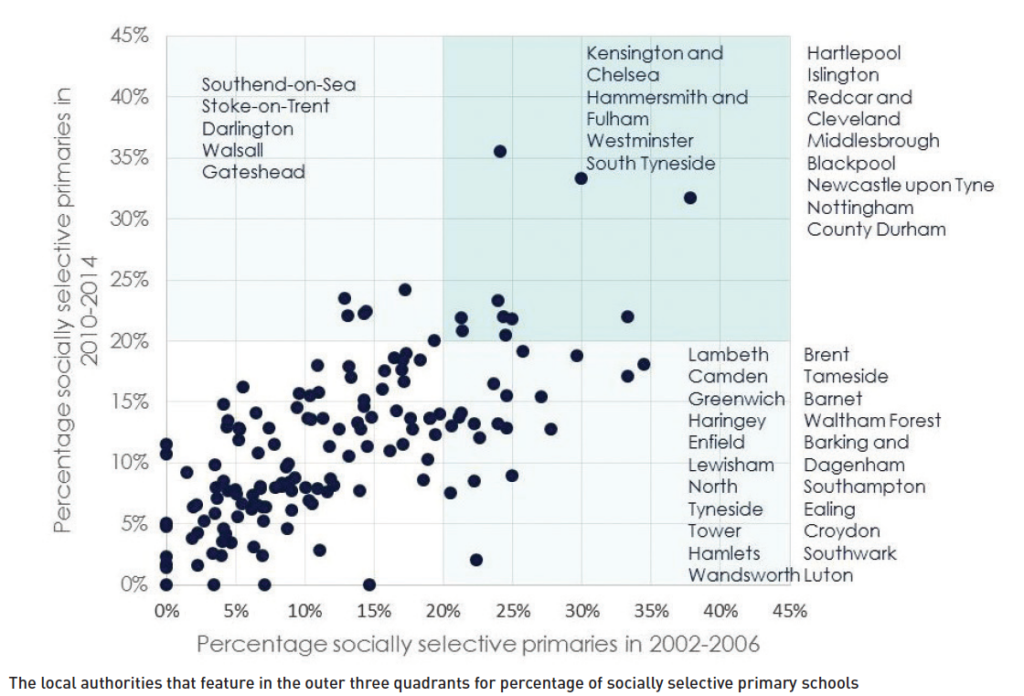 Schools with the best Ofsted ratings are more likely to socially select their pupils from higher-income families, a new study has revealed.

Caught Out, a report published by the Sutton Trust today, has found more than 1,500 English primary schools have intakes that do not reflect the socio-economic profile of their neighbourhoods.

The report found 13 per cent of schools rated outstanding by Ofsted were socially selective, compared with the 7 per cent rated as requires improvement and the 6 per cent rated inadequate.

The Sutton Trust said this could be hurting poorer children’s chance of success.

Sir Peter Lampl, chairman of the trust and the Education Endowment Foundation, said: “Disadvantaged young people should have the same chance of accessing the best state school in their neighbourhood as their better-off neighbour.

“We have previously documented social selectivity in secondary schools, but today’s findings warn us that primary school admissions are far from a level playing field.”

Schools deemed socially selective had a proportion of disadvantaged pupils at least 9.2 percentage points different from the communities they served. More than 1,500 schools with 310,000 pupils fitted this category.

Dr Becky Allen, director of Education Datalab and co-author of the report, said complex admissions criteria could be behind part of the inequity.

The report found the most selective schools, many of them religious schools, tended to use more complex oversubscription criteria. One used as many as 18 different criteria.

Elizabeth Passmore, the outgoing chief schools adjudicator, said in her annual report in January that too many schools were breaking the rules with “unnecessarily complex” admission arrangements.

Schools Week has previously highlighted how these arrangements can be used to skew instakes.

In December we revealed how pupils from chaotic backgrounds faced missing out on school places because they had to attend several secondary schools for fair banding tests. These supposedly ensure schools have a balanced intake of pupils with different abilities.

We have also revealed how the school attended by the daughters of both David Cameron and Michael Gove broke admission laws by asking parents for a financial donation when offering a place for their child.

The report found socially selective primary schools were more common in London and other urban areas.

Westminster, Kensington and Chelsea, and Hammersmith and Fulham have the largest percentage of primary schools deemed socially selective – more than 30 per cent in all three boroughs.

The Sutton Trust has now called for the admissions code to be properly enforced and for religious schools to open up more places to the local community.

A Department for Education spokesperson said determining admissions policies on the basis of wealth was “both morally wrong and against the law” and that all schools should follow the admissions code. Parents with concerns could contact the schools adjudicator.

“Our recent white paper is aimed at empowering parents to hold schools and the system to account. Alongside this, we will also be consulting on amending the mandatory school admissions code.”