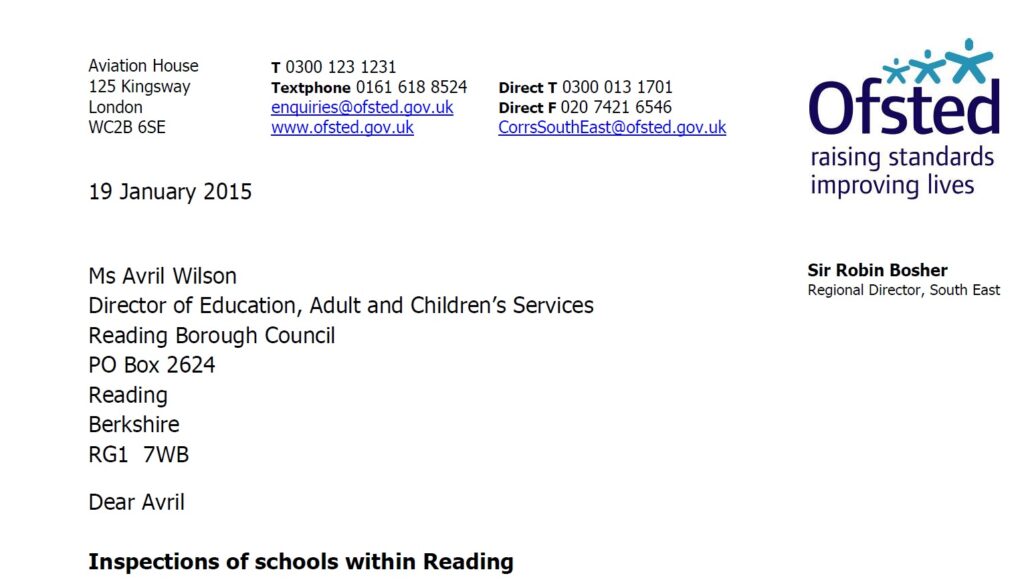 Ofsted has ordered Reading Borough Council to urgently address the declining performance of its schools.

The focused inspection reviewed 10 of the 56 schools in Reading.  Of those inspected three schools had declined, with two of these being placed in special measures, New Town Primary School and St Mary and All Saints Church of England Voluntary Aided Primary School.  Only one of the schools had improved since its previous inspection, Coley Primary School which went from requires improvement to good.

In his letter to Reading Borough Council, Ofsted, regional director, Sir Robin Bosher, raised concerns that the total number of schools judged to be inadequate had now reached  six in the past year and criticised the council for failing to take action.

It means more than a quarter of primary-aged children – 3,500 – are attending a school that is “not good enough”.

Sir Robin said: “It concerns me there has been a sharp rise in the number of schools judged to be inadequate in Reading since October 2013.

“I am also particularly worried that the council has failed to take action to prevent schools deteriorating to the point where they now require special measures.

“Inspectors’ evidence collated during the inspections indicates that the authority has not provided sufficient challenge or support to schools to enable them to improve quickly enough.

“As a result I am proposing to increase the amount of time Her Majesty’s Inspectors have to support and challenge the council to make the necessary improvements.”

The letter added there is too much variability in the quality of support schools receive from local authority officers and schools are not improving at a sufficiently rapid rate, noting there were no specific measures in place to help good schools become outstanding.

However, Ofsted did say the local authority knew the majority of its schools well and those requiring improvement, have serious weaknesses or are subject to special measures receive more support.

Reading Borough Council said it is putting in place a detailed improvement plan in recognition more needs to be done to ensure every child in Reading can attend an outstanding school.

The schools, which included six primaries, two special schools and two nursery schools, were all due for inspection by the end of the 2014/15 academic year and selected to encompass a range of schools with an emphasis on primaries because of their poor performance.