One in ten secondary schools in the north east, Yorkshire and the Humber and the east midlands have been “stuck” with a low Ofsted grade for up to 13 years, the watchdog has warned.

Ofsted’s chief inspector Amanda Spielman first warned of her concerns around “stuck schools” in October, when she revealed in a letter to MPs that there are 490 “intractable schools”, institutions rated ‘requires improvement’, ‘satisfactory’ or ‘inadequate’ at every inspection since 2005.

In its annual report, released today, the watchdog warned that two per cent of primary schools and five per cent of secondary schools nationally are considered “stuck”, though the report also reveals massive regional variations. 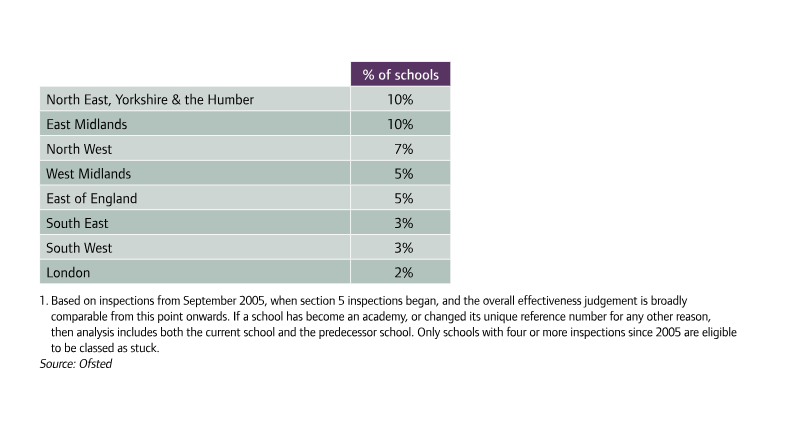 In its report, Ofsted warned that there is a need for “more outstanding schools and school leaders to step up to the challenge of providing system leadership”.

“We need more school leaders to give back to the system by collaborating and supporting struggling local schools, by becoming a system leader or forming a MAT.

“The current halfway house whereby all inadequate schools become academies and require a sponsor, but where there is a severe lack of capacity to sponsor them, has led to a mismatch in available support. Simply put, without more good sponsors, the DfE’s ambition to support failing schools will not be realised.”

Ofsted’s analysis found that eight in ten of the 490 stuck schools nationally have moved “back and forth” between the lowest Ofsted grades since 2005, never making it to a ‘good’ rating. Pupils at these schools made poor progress by the end of key stages 2 and 4.

Stuck schools are also much more likely to have white British pupils eligible for free school meals, who are among the worst-performing ethnic groups – 28 per cent at primary and 33 per cent at secondary, compared with 17 per cent and 18 per cent respectively across all schools. 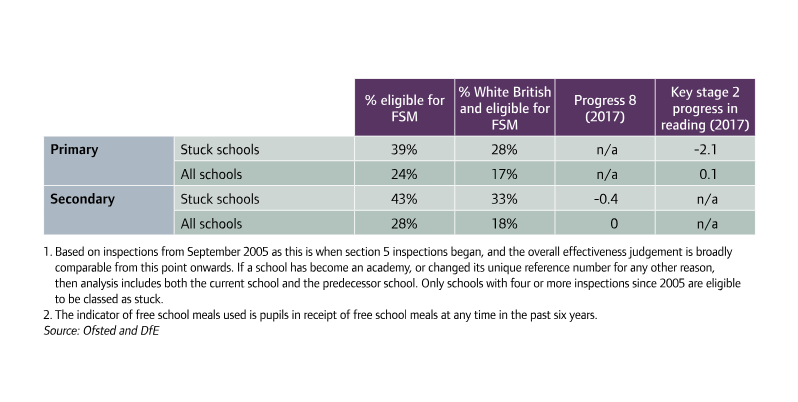 Ofsted also warned that four in ten of the schools identified as stuck were urged to review the way they use pupil premium funding at at least one inspection in the last three years.

Speaking about stuck schools in October, Spielman said: “That these schools remain poor for so long means that, for some children, in certain areas, there may be no opportunity to attend a good school at any point in their education.

“This is nothing short of a scandal and is a betrayal of children’s futures.”