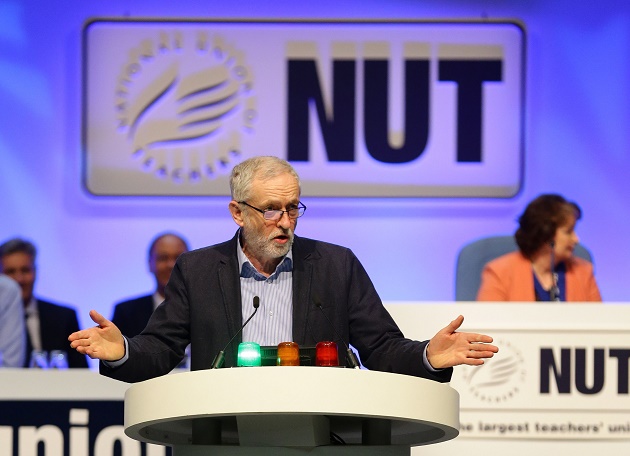 A new alliance between the Labour Party and a leading teaching union has been signalled after both sides spoke of working together to oppose government plans for schools.

Messages from Labour leader Jeremy Corbyn and National Union of Teachers bosses Christine Blower and Kevin Courtney were remarkably in-sync on the first day of the union’s annual conference in Brighton today.

And the fact that Mr Corbyn’s team took the unprecedented step of approaching the union to ask for an invitation to speak has been taken by leaders as an even stronger indication that Labour’s approach to education policy and campaigning is aligning with that of the unions.

It is believed to be the first time in decades, perhaps ever, that a party leader has addressed the conference. The last prominent Labour politician to attend was then-education secretary Estelle Morris in 2002.

Ms Blower said it was a “particularly interesting” time for the Labour leader to address her members, in the wake of a protest by thousands of teachers against proposals which could see all schools become academies by 2022.

Mr Corbyn attended a large rally organised by several unions in London on Wednesday, as did shadow education secretary Lucy Powell, who according to Ms Blower “said the kinds of things that we would want the Labour party to be saying, that this is the wrong policy, the wrong priorities”.

The Labour leader told delegates this afternoon that he was willing to “work with teachers” to stop the forced academisation of schools, and was invited to stay and mingle with members following his speech.

“The approach of the Labour leadership now is to talk to people and have engagement about their policies,” Ms Blower told journalists earlier today. “Jeremy got in touch with us and asked if he could come and speak to delegates.”

NUT deputy general secretary Kevin Courtney said he welcomed what he described as a move by Labour “towards our positions”, and said it was a “welcome development” that the party wanted work with teachers.

The union, which is likely to debate a motion that could pave the way for industrial action over the academies plan this weekend, will be quietly hoping for Labour’s support if it and other unions vote in favour of going on strike.

Buoyed by the tacit support of several prominent Conservative councillors who have come out against the government’s plans in recent days, Mr Corbyn today accused the chancellor and education secretary Nicky Morgan of an “ideological attack on teachers and on local and parental accountability”.

He said: “I want schools accountable to their parents and their communities – not to those pushing to be first in line for the asset-stripping of our education system.”

Schools minister Nick Gibb has accused Labour of “choosing to retreat into the fringes” by opposing his party’s reforms.

He said: “While Jeremy Corbyn and Lucy Powell are willing to undo the academisation process which started under Tony Blair and Andrew Adonis, we are determined to create a dynamic school-led system which empowers pupils, parents and school leaders.”