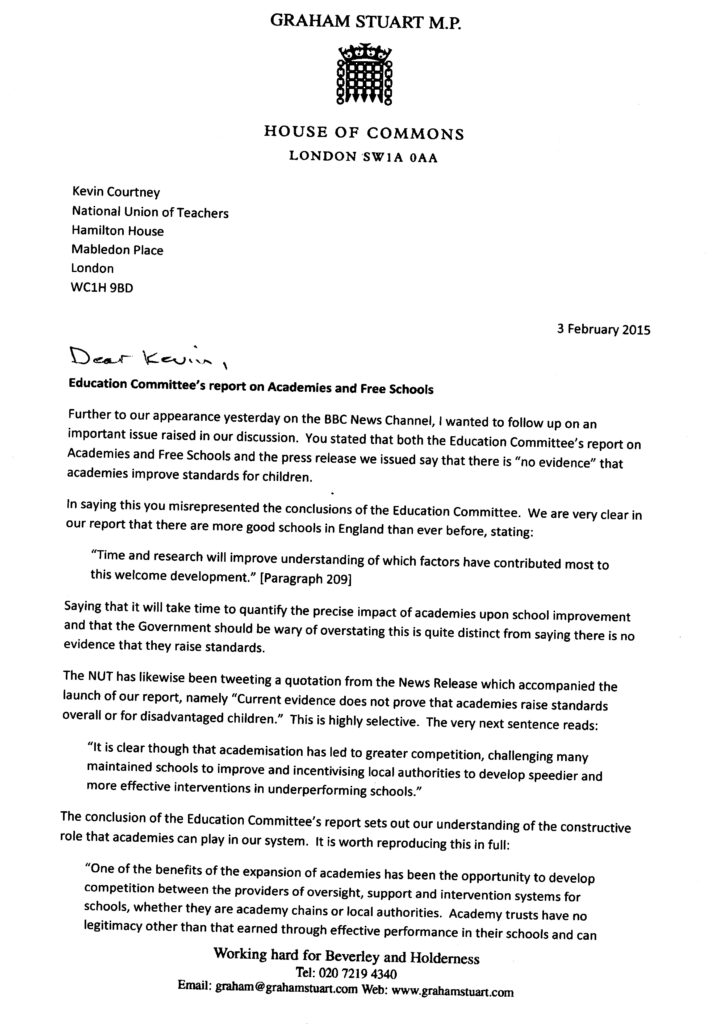 The chair of the education select committee has written to deputy general secretary of the NUT Kevin Courtney accusing him of misrepresenting its views on academies.

Graham Stuart sent the letter in his capacity as a constituency MP following both men’s appearance on the BBC News Channel on Monday.

According to Mr Stuart, Mr Courtney had commented that the committee’s report on academies and free schools and the press release accompanying it had said there was  “no evidence” that academies raise standards for children.

This “misrepresented the conclusions of the education committee”, according to Mr Stuart. He said the committee was “very clear in our report that there are more good schools in England than ever before”.

He referred to a paragraph in the report saying “time and research will improve understanding of which factors have contributed most to this welcome development”. He added: “Saying that it will take time to quantify the precise impact of academies on school improvement and that the government should be wary of overstating this is quite distinct from saying there is no evidence that they raise standards.”

Mr Stuart said the union had been “tweeting a quotation from the news release which accompanied the report’s launch”. This tweet, he added, said: “Current evidence does not prove that academies raise standards overall for disadvantaged children.”

This quote was “highly selective”, according to Mr Stuart. He said in the letter that the next sentence from the press release had read: “It is clear that academisation has led to a greater competition, challenging many maintained schools to improve and incentivising local authorities to develop speedier and more effective interventions in underperforming schools.”

He said he hoped the NUT would “resist from making further claims that there is no evidence that academies raise standards”.