Tens of thousands of sixth form pupils were forced to wait an extra year before resitting their English and maths GCSEs because of reforms to the qualifications, it has been revealed.

Data published this week shows 47,010 pupils in year 13 or above sat a GCSE maths or English exam in November this year, up from 24,250 last year.

Ofqual said this was in part down to the year 13 pupils who failed their English or maths GCSEs during the last year of the old qualifications in 2016 having had to “complete a full year of study” before resitting the exams.

The knock-on effect of the reforms prompted a staggering 94 per cent rise in November entries among that year group, the figures show.

November entries give schools an opportunity to enter sixth form pupils who failed their English or maths for resits.

Bill Watkin, chief executive of the Sixth Form Colleges Association, said his members had “anticipated this rise”, which he said was “likely to be a temporary effect of the introduction of the new GCSEs”.

“Sixth form colleges enjoy significant success in helping their students to pass their resits, though the need to do so represents a big challenge: in addition to teaching costs, finding enough accommodation and invigilators can make the exam days very busy and very expensive. 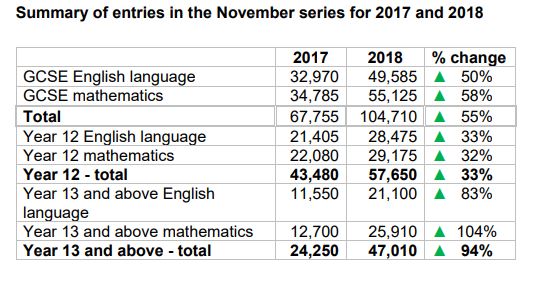 “If the government is going to press ahead with this requirement, it must be sure to fund all students, not just those doing T Levels, for their resits, so that all young people have the best opportunity to reach these vital thresholds in English and maths.”

Since August 2015, full-time students who don’t achieve a grade C (now a grade 4) or above in their English language and maths GCSEs have had to continue studying the subjects to meet post-16 funding requirements. However, it is up to schools when they enter their pupils for resits.

Despite the significant rise in resits among year 13 pupils this year, which mirrors a similar rise in 2016, the year before the new tougher exams and 9 to 1 grading system came into force, year 12 remains the most popular year for retakes.

This year, the number of year 12 pupils sitting maths and English GCSEs in November grew by a third, with 57,650 taking the exams compared with 43,480 last year.

Overall, GCSE entries in November increased by 55 per cent.

However, despite the rise in entries there was a drop in the overall number taking the GCSE maths higher tier exam, falling 17 per cent to 3,685.

The report said this suggests that “the majority of entries have been made by learners who are re-sitting the foundation tier so they may continue studying and be funded post 16.”