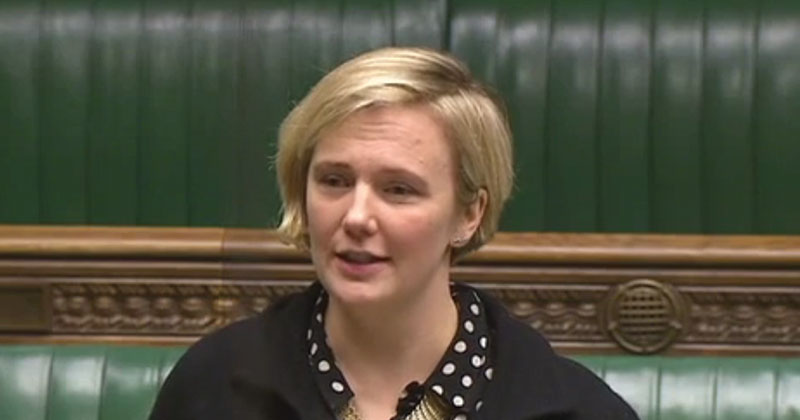 A firm accused of beaming political “propaganda” into primary schools without consent has claimed screenshots of its videos have been “deliberately” taken out of context.

Phil Austin, managing director of Anomaly, which produces content for digital noticeboards in schools, said he had received a death threat after slides from a presentation were shared on social media amid claims the content was pro-Brexit.

Stella Creasy (pictured), the Labour MP for Walthamstow, told the House of Commons yesterday that she had been contacted by “concerned” parents “about the content of a presentation about the Prime Minister’s proposals and Brexit that had been broadcast on 3,000 digital noticeboards in primary schools around the country, without the prior consent of the schools”.

Creasy tweeted to say constituents had been in touch “all day” about the apparent Brexit adverts.

All day constituents been in touch concerned this is the government advertising in schools – just asked PM to confirm he isn’t and he didn’t answer. Don’t think this example is from my inquiries but worrying PM didn’t agree primary schools should be brexit propaganda free zones… pic.twitter.com/cVdvXy5q28

Pictures she shared included one with the caption “he has promised to put more money into schools, more money into the NHS and 20,000 police officers back on the streets” and another that simply said “he wants to unite the UK” on a Union Jack background.

One shows a picture MPs sitting in the House of Commons which says politicians “haven’t been able to agree a deal on the best way” to leave the EU and Boris “has promised Brexit would be done”.

Another showed the infamous picture of Johnson stuck on a zip wire with the caption: “People have many different views about Boris Johnson because of his political views, plans for Brexit, personality, dress sense and past behaviour”.

But Austin told Schools Week the presentation also included slides – immediately after the “he wants to unite the UK” slide – stating that “a large number of people don’t agree” with prime minister Boris Johnson, amid a backdrop of anti-Brexit posters.

There are also slides on other prime ministers, including Sir John Major. Austin, who would not share the full presentation with this newspaper, said the slides were seen by less than 20 schools. He also told Schools Week he has “never taken a single penny” to promote videos in schools.

However he added: “I’d like to issue an unreserved apology to anybody that this has caused distress to.”

The video was pulled after being shown for a few hours yesterday, and won’t be shown again, he added.

Anomaly runs content on noticeboards – which schools rent off them – covering issues such as British values, anti-bullying and getting pupils healthy.

Creasy clarified that she did not think the pictures she was sharing were from her “inquiries”, and that she did not believe they were government funded, but said it was “worrying PM didn’t agree primary schools should be Brexit propaganda free zones”.

“These slides were certainly shown in Walthamstow and across country today but don’t think it’s government-funded. Tbh though more concerned PM didn’t seem to have a problem with idea in first place.”

Austin told Schools Week the description of the content “is wholly inaccurate”.

“It’s not Brexit content. It’s part of our British values… it’s about prime ministers. We have been accused of being paid by Boris Johnson.

“It was naïve leaving it open to interpretation – it can enable people to take certain screenshots and deliberately misrepresent what they message was.

“We haven’t done anything wrong. It’s just not right. It doesn’t take context into perspective.”

After speaking to a complainant yesterday about the slides, Austin says his email has since been shared widely, resulting in receiving a death threat and him being labelled a “fascist bastard”. He has also had to take the company’s website down.

“We have never had a complaint about out content, we work in thousands of schools. It’s made me physically ill. It’s distressing other schools [we work with].”

The 63-year-old said the fallout has “put jobs on the line” at his firm, which he said has been working with schools for 15 years, adding he’s also having to consider his position at two charities he leads.

The Cabinet Office said the videos were not part of the government’s official ‘Get Ready for Brexit’ campaign, and there were no plans to show anything from that campaign in schools.

Creasy told Schools Week that schools were not asked for their consent before this video was shown and the refusal of the company to hand over the full document “as well as aggressive approach to parents who asked to see it raises further questions about their conduct”.

Austin said he had been working with the school for years and also contested claims he was aggressive to the complainant.