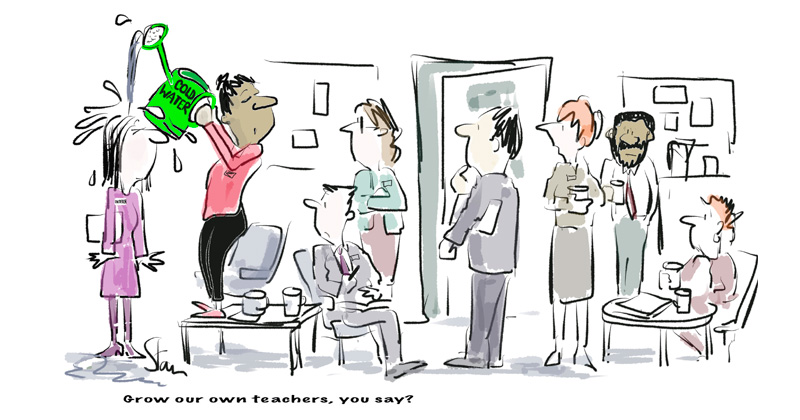 Unions fear that a national scheme to place teaching interns into classrooms will be used as a cost-cutting device.

The graduate teaching internship (GTi) scheme, run by new company TryTeaching, plans to give potential teachers the experience of working in a school for between one and three terms before they embark on an initial teacher training (ITT) course.

But with salaries equal to the minimum for support staff, unions say they are worried about the use of “cheap” alternatives to teaching assistants.

Jon Richards, head of education at Unison, said: “Any initiative to improve teacher recruitment should be examined. But in times of squeezed budgets we wouldn’t want to see schools use interns as cheap replacements for teaching assistants.”

Richards said research, such as that from the Education Endowment Foundation, suggested that “properly deployed well-trained teaching assistants delivering structured programmes” could impact pupil outcomes, but he wouldn’t want to see those results “undermined by short-term intern programmes”.

Nick Breakwell, the founder of TryTeaching – who previously set up and ran an ITT provider that is now the TES Institute – has said that while there will be some overlap of roles, interns are different to teaching assistants.

“This should be a way for schools to ‘grow their own’ teachers, so when they end the internship they would be able to do their ITT with the school. It is a different approach to teaching assistants. But there will, of course, be some crossover with roles and responsibilities.”

The deployment of interns would be down to each institution, but TryTeaching encourages schools to give them a “broad experience” such as one-to-one pupil support, co-teaching and literacy and numeracy coaching.

Schools taking part in the scheme will pay TryTeaching, which was set up in March this year, up to £2,100 to recruit and support each intern, and then pay a salary via the company.

Breakwell said salaries would be agreed at a minimum of what support staff receive – £13,614 a year, according to the local government payscale.

Schools Week reported last year that schools were increasingly having to pay agencies to find new staff. At the time, Helen Manley, a senior adviser at Cambridgeshire County Council, accused the organisations of “hoovering up” new teachers and said their finder’s fees of around £3,000 were a “huge problem”.

Breakwell said the intern scheme would help to improve recruitment and reduce teachers’ leaving rates as trainees would be better prepared.

Deborah Lawson, general secretary of Voice, the union, agreed with Richards’s concerns about the impact on teaching assistants, and questioned the plan of interns in schools for short periods.

“Would there be consistency in staffing across the school if staffing is changing every year or term?

“GTi also say it will mentor the interns, but we know that the current support for newly qualified teachers is already an issue. Is there the capacity to mentor more people who aren’t even teachers yet?”

Intern schemes are already operating in some areas or for specific subjects. The Ogden Trust Teach Physics programme, which works with 37 schools, recruits physics graduates. In Suffolk, a scheme called Rising High places interns into schools in the county.

A similar scheme was also advertised by the Department for Education (DfE) last March. It wanted school-led training schemes, such as School Direct, to bid for cash to offer internships to graduates in science and maths-related subjects. It said participants would be paid £300 a week.

No information is available about whether any interns were recruited through such schemes. When asked, the DfE declined to comment.

The government has missed its teacher training targets for the past four years.

Breakwell said 50 schools will be signing up to the GTi scheme, and it was looking to link up with a provider of “portfolio route” training ITT. He would not confirm if the TES Institute would be approached.