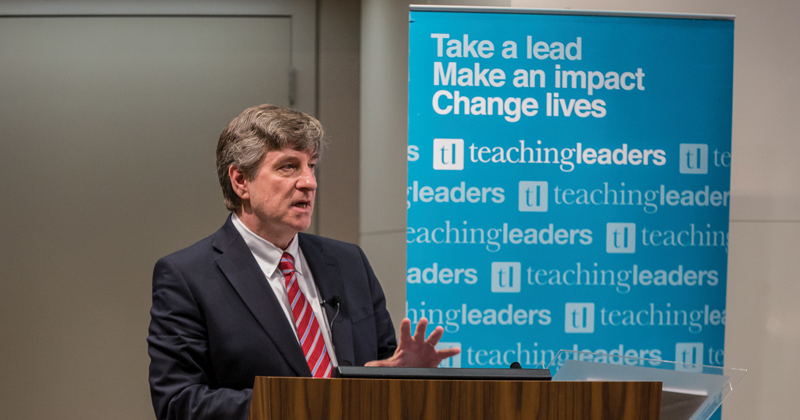 The national schools commissioner will visit each of his regions for a “two-day residency” over the next year as part of a push for greater transparency – but criteria for intervention in underperforming academies remain a mystery.

At the launch of the Teaching Leaders annual report on Tuesday, Sir David Carter revealed several ambitions for his time as national commissioner, which began in February, including recruiting “academy ambassadors” who will work unpaid for three days each year supporting trusts, and encouraging “peer review” across school clusters. He will also spend two days in each of the eight commissioner regions, to better understand their context.

Urging listeners to refrain from talking about “academies versus maintained schools”, he said the challenge was making an all-academy system work. “We’ve made fantastic progress, but we’re not there yet, if this is an 800m race towards world-class status, we’re on the first bend.”

Earlier in the day, the Department for Education released a number of “transparency documents” outlining how Carter (pictured), and the eight regional commissioners he oversees, will work with academies. The documents include the criteria for approving free schools and academy sponsors. However, criteria for interventions on under-performing academies were sparse. The document states that if academies are considered to be under-performing, commissioners could broker “appropriate support”, issue warnings, terminate funding or identify a new sponsor “where necessary”. No further criteria were given.

Carter’s speech was given in celebration of Teaching Leaders, an organisation supporting middle leaders in challenging schools to develop their practice. Schools Week reported last month that the organisation has secured government funding to double its intake to 1,500 over the next three years.

Emma Quartey, deputy headteacher at Mulberry School for Girls in east London, spoke about her school’s plan to start a multi-academy trust from September. She highlighted the impact on support staff who so far had been confined to working in one school: “If you lead on data, or support structures, then to do that over a broader network of schools is actually quite exciting.”

Asked about the expanding role of commissioners, and whether they would simply become a replica of local authorities, Carter said his focus was purely on accountability and not “running schools”.

“The thing about the job advert that captured my attention was that when academies don’t deliver what they say in the funding agreement -and on the basis that few academies said they would reduce standards, but presumably talked about getting better – then where that has not happened I think we have a duty and responsibility to intervene.”

Asked by an audience member to expand on plans for academies to peer-review one another, Carter said he was only sharing “early thinking” and that he would not “pretend” the plans were detailed.