The second annual National Reference Test has shown improvement in maths scores, but no real change for English language.

According to Ofqual, the results –which are reported at grade 7, grade 5 and grade 4 – suggest teachers have become more familiar with the new maths GCSE requirements.

However, there is very little change in the English language results, with fewer pupils achieving the standard grade 4 pass.

First piloted in 2016, the tests involve a sample of year 11 pupils sitting the exams each year in order to monitor, over time, how well cohorts of pupils are performing. The results act as a guide for increases or decreases in that cohort’s GCSE grades. 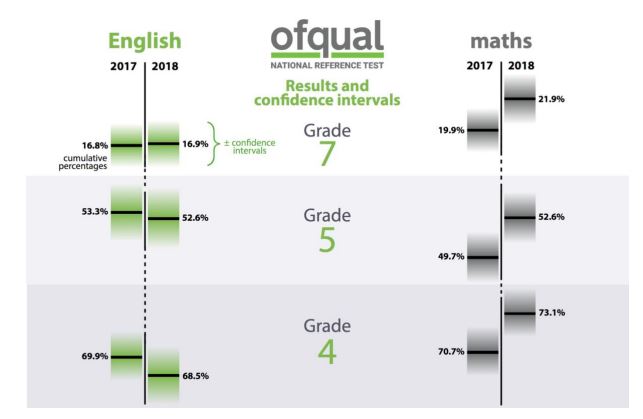 The report said the change for English language was “not statistically significant, which means that we can’t be sure there has been a real change”.

However, for maths there was evidence that “student performance has improved slightly”.

“This is not surprising, as we might expect to see an improvement in performance in the first years, as teachers get more familiar with the requirements of the new GCSEs.”

As this is only the second year of the test and the new GCSEs, the results are being used as a comparison against last year and are not being used in GCSE awarding.

However, from next year Ofqual will consider evidence from the tests in May to decide whether to make an adjustment to the summer grade standards in English or maths.

“It is also worth noting that the impact of any adjustment is likely to be relatively small. For example, if we wanted to adjust grade standards in GCSE maths on the basis of the 2018 NRT results, it would have meant grade boundaries in the maths papers being one or two marks lower,” the report said.