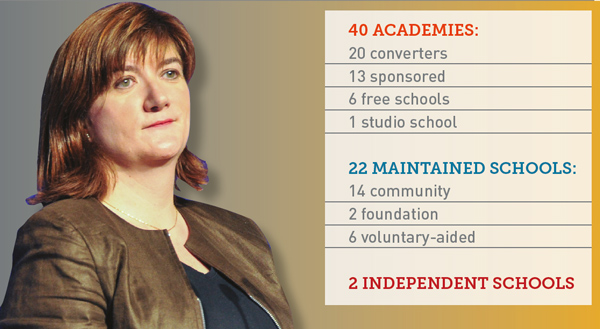 Nicky Morgan visited more than double the number of academies as council-maintained schools during her first 14 months in office, it has been revealed.

Figures released under the Freedom of Information Act and analysed by Matthew Wheeler, a school business management expert, offer an insight into the visiting habits of the education secretary.

Since her appointment in july 2014 and last September, Ms Morgan visited 40 academies, of which 20 were converters, 13 sponsored, six free schools and one a studio school. One free school, Corby Technical School, was visited twice during the period.

During the same timeframe, the education secretary visited just 14 community-maintained schools, two foundation schools and only a handful of independent and voluntary-aided schools.

Among the schools visited by Ms Morgan was Durand Academy in London, which has faced controversy in the past year with questions over its finances and alleged conflicts of interest.

A Department for Education (DfE) spokesperson said Ms Morgan had visited schools and colleges “across the length and breadth of the country to meet children, teachers and school leaders”.

She said: “Decisions on visits are made based on a variety of factors including initiatives the schools are promoting, recent events and requests.

“As these figures show, the secretary of state – and other ministers – are keen to see all types of school and will continue to tour the country during the course of this parliament.”

But Janet Downs, from the Local Schools Network, which promotes maintained schools under local oversight, said she was not surprised the education secretary had visited so many more academies than other types of school.

She said: “I have always thought that since 2010 the DfE has had a bias towards academies. Their website promotes academies and free schools with glossy photographs, while community schools barely get a page.

“I’m not surprised that she’s mostly visiting academies and only a handful of community schools. If she did visit a good community school, she would probably advise it to become an academy to take advantage of the so-called freedoms.”

The list excludes all visits undertaken by Ms Morgan in her local constituency and those during the run-up to the general election last year – these are considered “political” and do not relate to the position of education secretary.