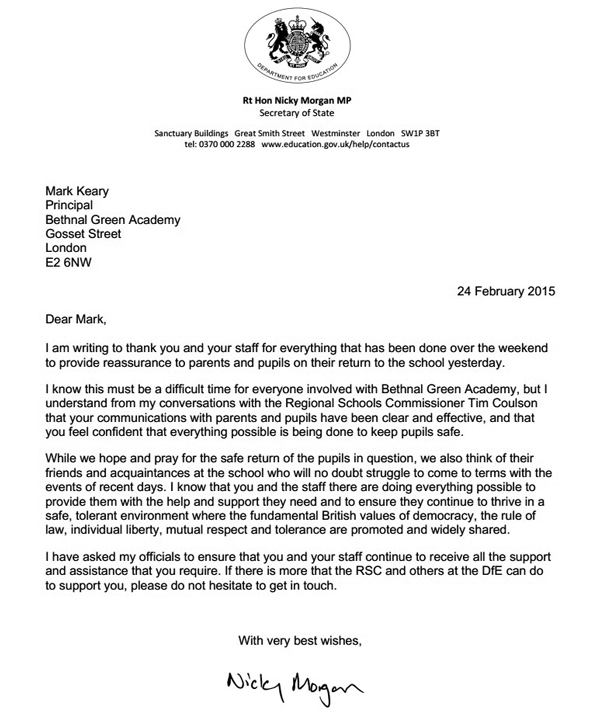 The education secretary has ordered a review of schools whose pupils have fled to Syria – just days after she wrote to one such academy offering her full support.

Nicky Morgan won plaudits for a sensitively-worded letter to Bethnal Green Academy last Tuesday after three of its teenage pupils left the country, without their families, amid concerns that they intended to join up with Islamic State militants.

She thanked staff for doing “everything possible” to provide help and support during the difficult time and said she had been reassured the school was doing all it could to keep pupils safe.

But, in what appears like a U-turn, it was revealed on Saturday night that Ms Morgan had ordered the Department for Education’s (DfE) due diligence and counter extremism division to review any schools where there was evidence pupils had travelled to Syria.

A DfE source strongly denied Ms Morgan had backtracked or changed her stance, stressing that the reviews are historic in focus and unrelated to the Bethnal Green Academy letter.

The source insisted the investigations – contrary to national reports – are not “witch-hunts”, but aim to support schools in difficult circumstances.

The only school confirmed as under review is Quintin Kynaston (QK), the St John’s Wood academy which taught Mohammed Emwazi – the alledged Islamic State executioner who has been nicknamed ‘Jihadi John’.

But Schools Week understands Bethnal Green Academy is also being scrutinised, as there is strong evidence its pupils have fled to Syria.

A DfE spokesperson said: “The secretary of state has asked them [the due diligence team] to review those schools where we have evidence of links with pupils who have travelled to Syria.

“The allegations about QK may be historic and it is clearly a completely different school today, but I’m sure we will look back at the evidence from the time as part of this review to see if there are any lessons we can learn for the future.”

The Bethnal Green Academy pupils, who left for Syria in February half-term, are thought to have joined the Islamic militants as frontline fighters or brides for Jihadis.

Two former pupils at QK were also reported to have joined Mr Emwazi, who left the school in 2006, to become Islamic fighters.

Alex Atherton, headteacher of QK, said the academy had been highly proactive in working with the government’s Prevent strategy to counteract extremism.

Jo Shuter, headteacher at the time Mr Emwazi attended, told the BBC Radio 4 Today programme on Monday: “There was never any sense that these young men as I knew them were radicalised while they were at school.”

It was revealed on Sunday a total of 18 girls aged 20 or under have travelled to Syria in the last year. The last five to travel are aged 15 or 16.

A DfE spokesperson added: “Our understanding of the challenge, and the way we monitor the ability of schools to respond to it, has advanced hugely in the past few years.

“As part of this, this government set-up a dedicated due diligence and counter extremism division within the DfE and they are working tirelessly to develop our understanding of the problem and to see if and where we can offer help to schools with pupils or former pupils who have since travelled to Syria or other areas of concern.”