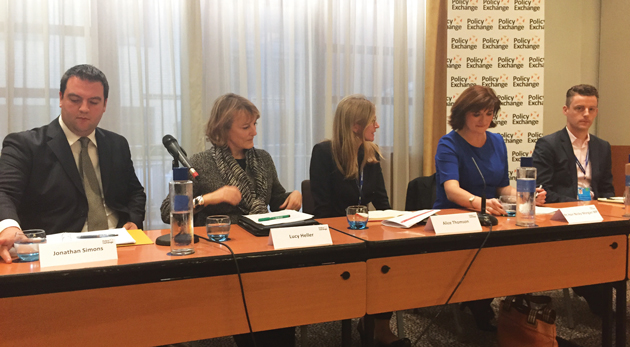 The education secretary Nicky Morgan has said she is ‘not looking at’ the return of assisted places or new grammar schools, after rumours emerged Number 10 were considering it.

Speaking on a panel at a Policy Exchange Conservative Party fringe event this week, former director of policy at 10 Downing Street James O’Shaughnessy was quick to call on the education secretary to ‘resist’ selective education.

He said: “There is an idea being floated from Number 10 to bring back assisted places, or academic selection [grammar schools].

“I didn’t spend ten years trying to get the Conservative party to talk about the majority to let this opportunity slide to take these ideas on.

“Any sense that we are moving back to academic selection would be a complete disaster educationally and politically, and if that’s a disaster, assisted places is even worse.

“Populated as it was by middle class parents looking for a discount on their private education. If you wanted to put even 1 per cent of children through an assisted places scheme at boarding schools that would cost £3bn, that’s about five per cent of the schools budget.

“Nothing sends a message more than that. They are not interested in what the 99 per cent of children need, so Nicky I hope you are able to resist these crazy ideas.”

Chair of the event and columnist for The Times, Alice Thomson, then pressed Ms Morgan on her plans for the assisted places scheme.

The chair asked: “Can we clear up the assisted places issue. Is that something you are looking at?”

Nicky Morgan replied: “I’m certainly not. It’s not something I’m looking at.”

The assisted places scheme was introduce by the Conservatives in 1980 and provided bright children from low and middle-income who could not afford to go to private schools with free or sponsored places.

The Government paid a proportion of the fees, depending on household income.

Ms Morgan was later questioned on the topic of introducing legislation to allow for new grammar schools. She replied: “There aren’t going to be any more grammar schools under me.

“I am resistant to selective education. But if they want to expand we [the Conservatives] certainly won’t stand in their way.”