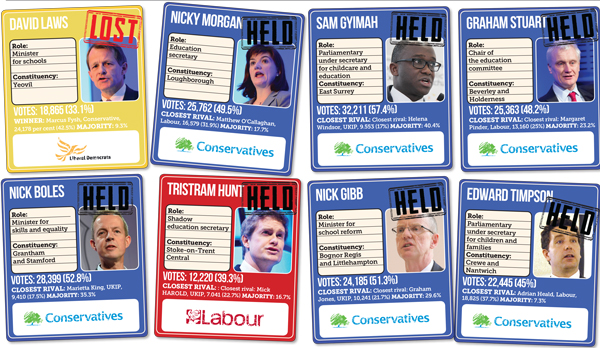 Conservative education ministers all held their seats last week after the party stormed into Westminster.

Education secretary Nicky Morgan led the Tory charge and obliterated weeks of polls suggesting that Conservatives and Labour were neck-and-neck.

Labour targeted Ms Morgan’s marginal Loughborough seat, but she won with a relatively comfortable 17.7 per cent majority, picking up nearly half the votes.

Children’s minister Edward Timpson also dismissed earlier doubters and won back his Crewe and Nantwich seat with a 7.3 per cent majority, although he had to wait until after 9am on Friday for confirmation.

The previous education team’s only ministerial casualty was Liberal Democrat David Laws. The former schools minister lost his Yeovil seat in a “cruel and punishing” night for his party as they dropped nearly 50 seats.

Conservative Marcus Fysh won with a 9.3 per cent majority at around 6am on Friday, overturning Laws’ 5,313 vote majority.

The party is yet to confirm its future plans for appointing a new education spokesperson.

The night also marked a resounding victory for the Scottish Nationalist Party which won all but three of Scotland’s 59 seats.

SNP MPs have tended to abstain from voting on English-only legislation in the past, which includes education as it is one of the powers devolved to the Scottish Parliament.

But a party spokesman told Schools Week that MPs would vote on issues affecting the UK as a whole, and that more details would be outlined in the coming weeks with the announcement of a shadow cabinet.

“No one congratulates the captain who steers his ship around the storm rather than through it.”

For several years in schools, this saying was apt. Reform upon reform, and Michael Gove’s persistent characterisation of a sector in the grip of “the blob”, made school leaders feel like they were in a storm whipped up for effect.

The reappointment of Nicky Morgan, a calmer force over the past year, and her entire ministerial team, makes it seem as if “steady goes the ship” might now be a more appropriate naval metaphor.

To think this, however, is to underestimate Ms Morgan and her party’s ambition.

The manifesto pledges are worth a re-read in the surprising light of a wholly-Conservative government.

The promises are strong on academisation, free schools, more testing, and on more “rigour” – or, at least, academic subjects being given first preference.

It is, as I said in an online piece last Friday morning, like Gove’s plans – but on speed.

Many in the teacher community will treat this with sadness. If “shy Tories” are a real thing, Tory teachers may be the shyest of all. Trying to find some to comment on stories is so difficult it can make you believe there aren’t any.

But whether they exist or not, the public has spoken. The Conservatives have a clear mandate for their reforms – with Nicky Morgan particularly liked among her constituents – and while implementation should be watched closely, it would be demeaning to the public’s preference to dismiss Conservative plans off-the-bat.

In England democracy means the winner takes all. The school community need to brace themselves for that.