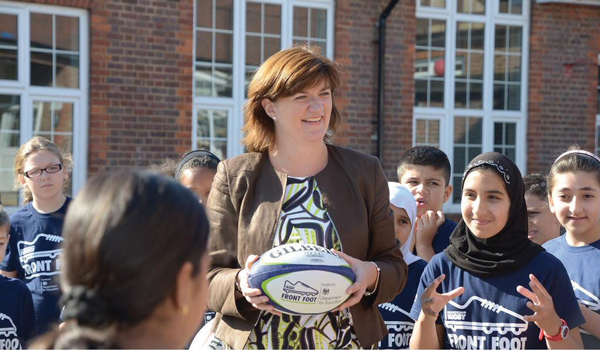 Nicky Morgan, above, teamed up with pupils and rugby professionals at a London school last week to launch On The Front Foot, a scheme in which rugby premiership coaches will be drafted into schools.

The children were split into groups for sessions on leadership and teamwork in the classroom, before taking to the playing field for rugby games, one-on-one skill games and small-sided matches.

The scheme follows the government’s promise to fund 14 professional clubs to design and deliver programmes during the year and comes on the cusp of this year’s Rugby World Cup, hosted by England.

All 12 Aviva premiership clubs, plus London Welsh and Bristol, will work with local pupils through the scheme.

Chris Bell, Wasp’s head of off-field player development, said: “The profile of rugby will grow hugely over the next few months so this is the perfect time to use that exposure for good and to help bring the core values of respect, teamwork, enjoyment, discipline and sportsmanship into the classroom.”