The number of schools asking to opt out of legal requirements to provide a daily act of Christian worship appears to be slowing, but more are choosing to run “multi-faith” alternatives instead.

Of the 48 schools that applied to their local Standing Advisory Council on Religious Education (SACRE) board to opt out of the daily act of worship over the past three years, 42 were successful.

Determinations allow schools to change their collective worship from being “wholly or broadly” Christian in nature, a rule that has been in place since 1944.

Most of the schools requesting determinations in the past three academic years asked to hold “multi-faith” assemblies instead, which the Rev Stephen Terry, chair of the Accord Coalition (a body that campaigns for inclusive education), said was “encouraging”.

Of the 134 local authorities to respond to a Freedom of Information request from Schools Week, 12 had received applications from schools in the past three years to change their collective worship. 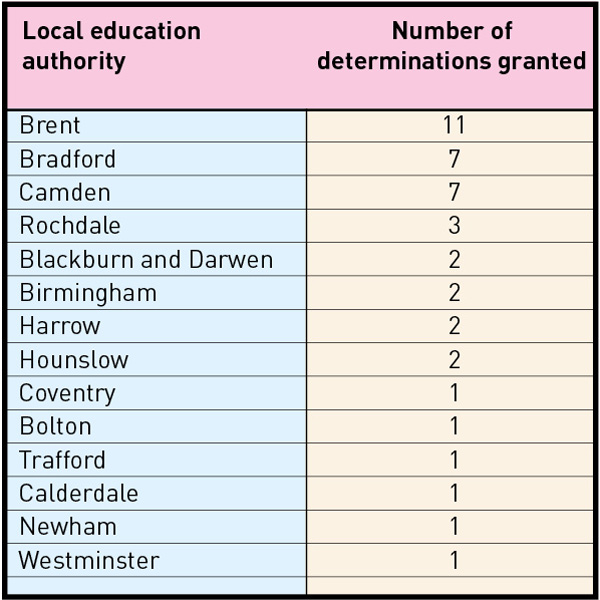 Holbrook Primary School, in Coventry, was the only school among the 42 to have opted for assemblies of no faith.

Meanwhile, Plashet School, in Newham, was given permission to run a combination of alternative faith, multi-faith and no faith elements throughout each week.

Brent Council granted the highest number of determinations – 11. This was followed by Camden Council and Bradford Council, which both granted seven.

Schools Week reported that an average of around 40 applications were being lodged per year between 2013 to 2015.

One reason for the decline in applications to local SACRE boards could be the rise in academies, which have to apply directly to the Department for Education for determinations.

The true number of schools applying for determinations is therefore likely to be higher.

But the Rev Nigel Genders, chief education officer for the Church of England, said: “The fact that only 42 out of 25,000 schools have done so suggests that schools are able to work within the broad definitions that exist in law.”

Mr Genders added that the law allows schools to apply for a determination “to reflect the school’s local context”.

The Catholic Education Service said that collective worship is an “essential part of the life of every school”, and can also provide a “shared language of values to build a close-knit cohesive community”.

A survey commissioned by the Humanists UK campaign group earlier this year found that less than a third of people believe acts of worship, such as prayers, are appropriate for school assemblies.

Accord Coalition said that the legal requirement for collective worship is “unsustainable in a culturally diverse society”, adding that the current law is “not fit for purpose”.

Alastair Lichten, head of education at the National Secular Society, said that the findings are “yet another reason for ministers to repeal the requirement for schools to hold acts of worship and ensure any worship is genuinely voluntary”.

“Many schools already hold inclusive ethical assemblies that may provide space for voluntary worship but don’t direct it.”

Parents can withdraw their pupils from collective worship. But this rule is about to come under scrutiny after parents launched a high court challenge against Burford Primary School, in Oxfordshire.

Parents Lee and Lizanne Harris withdrew their children from the school’s religious assemblies, but allege no meaningful alternative education was provided.

The Department for Education has previously said collective worship “encourages pupils to reflect on the concept of belief and helps to shape fundamental British values of tolerance, respect and understanding for others”.

In 2004, Ofsted stopped inspecting collective worship after 76 per cent of schools were found not to be following the practice.