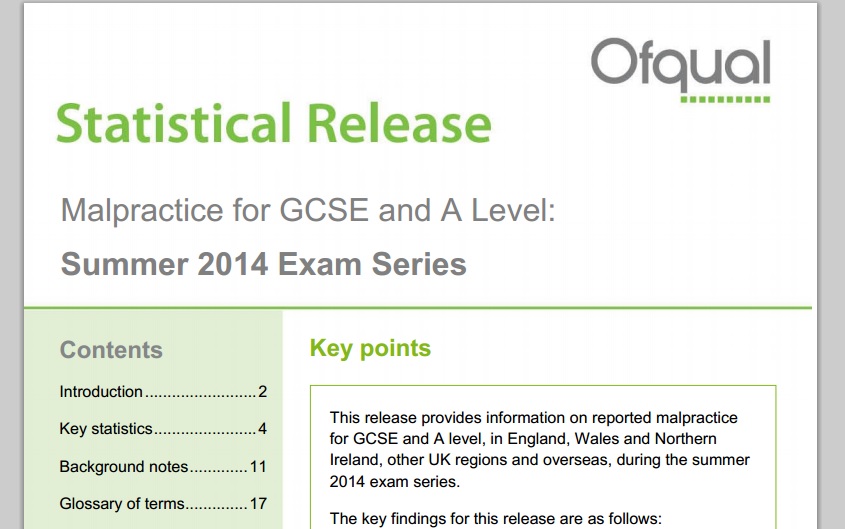 The number of school and colleges issued with penalties for exam malpractice increased sharply this summer, newly released figures show.

In total, 217 schools were hit with penalties for issues identified during GCSEs and A-levels this summer, up on the 140 penalties issued a year before.

The increase coincided with the end of modular study for GCSEs, and of January assessment for AS and A-levels, meaning there were around 2.2 million more entries for summer exams.

The majority of schools found to have engaged in malpractice – 156 – were given a written warning, while 51 schools were required to produce a report on the issues identified. Other schools were given penalties that could have included more inspection and monitoring of exam arrangements, or even a suspension of entries.

The figures, produced by Ofqual based on information provided by exam boards, show that 37 schools in England, Wales and Northern Ireland were found to have provided unwarranted assistance to candidates this summer. No schools were found to have committed such malpractice last year.

Penalties issued to individual students decreased in both absolute and percentage terms. This year 2,550 exam candidates were penalised for exam malpractice, down on the 2,590 cases the previous year – despite an increase in the number of people sitting GCSEs and A-levels.

The numbers are also well down on five years ago, when 4,130 candidates were found to have cheated in exams.

Penalties where malpractice was found to have been committed by an individual teacher or invigilator increased slightly on last summer, from 110 cases to 119.

In the greatest number of cases – 82 – this was because of assistance given to candidates.

Last week, Schools Week reported that the number of schools that had had whole cohorts of key stage 2 results annulled had increased sixfold from 2012 to 2013.