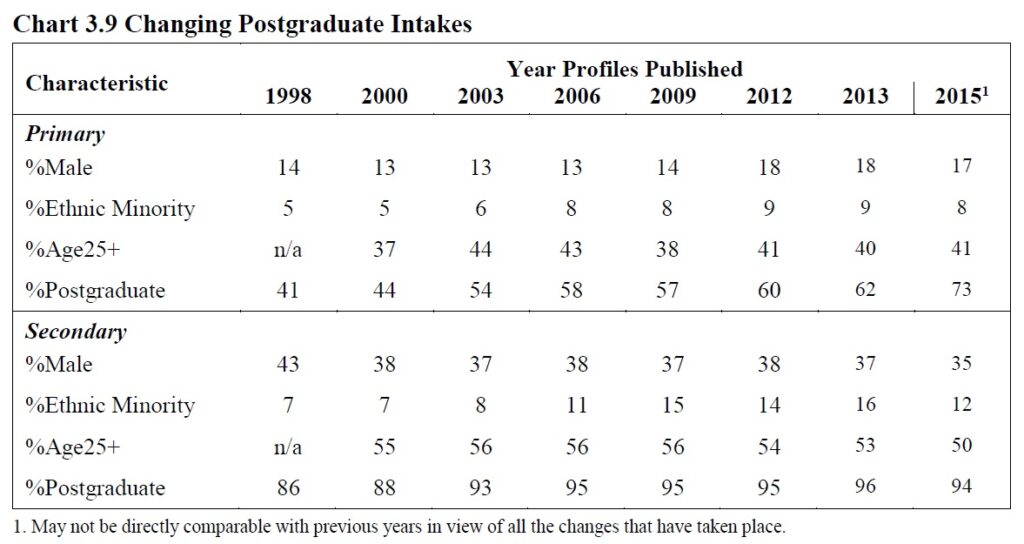 The Good Teacher Training Guide 2015 also found the top three training providers were school-based. The guide was produced by Alan Smithers and Mandy-Diana Coughlan from the Centre for Education and Employment Research (CEER),

The proportion of trainees from ethnic minorities has increased substantially over the same period, in both primary and secondary routes.

The findings from CEER would also seem to support the government’s focus on school-led teacher training, through School Direct or school-centred initial teacher training (SCITT) providers.

The report named the North East Partnership SCITT as the best postgraduate teacher training provider this year, followed by the Billericay Educational Consortium SCITT, then the King Edward’s Consortium in Birmingham. The University of Cambridge was ranked top of higher education provision, and in fourth place overall.

Trainees on school-led programmes are more likely than those on HEI programmes to be male and over 25 years of age. Professor Smithers (left) said: “These findings are promising for the Government as it seeks to move, as it said in its White Paper last week, ‘to an increasingly school-led ITT system’.

“The quality of teacher training in schools emerges as higher in both inspectors’ grades and recent trainees’ ratings. More of the trainees also became teachers.”

Universities tended to bring in trainees with higher degrees than school-led routes. On average, 75 per cent of trainees on university courses had a 2:1 or first-class degree, compared to 61 per cent on the salaried School Direct route.