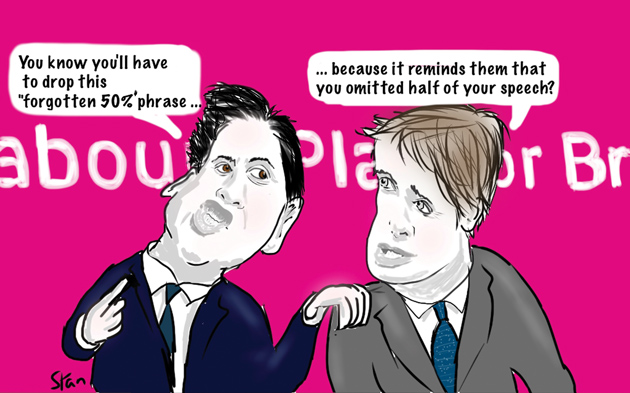 Schools will have to “lead a dramatic change in education” under a Labour government, the party leader Ed Miliband has said.

Delivering his keynote speech to the Labour party conference in Manchester on Tuesday, Mr Miliband pledged to deliver the same number of apprenticeship starts as university places and said the change had to start in schools.

His comments came two days after shadow education secretary Tristram Hunt outlined his three priorities, including childcare reform, a qualified teacher
in every classroom, and an education system “which works for the forgotten 50 per cent”.

Mr MiIiband has faced criticism for forgetting parts of his no-notes speech, although he did provide a level of detail about technical education reform that had been lacking in Mr Hunt’s speech.

He said: “Our fourth national goal is that by 2025 as many young people will be leaving school or college to go on
to an apprenticeship as currently go to university.

“This is an absolutely huge undertaking. We are such a long way away from this as a country. It is going to require a massive national effort. It’s going to require young people to show the ambition to do well and to get on.

“It’s going to require schools to lead a dramatic change in education, with new gold standard technical qualifications. And it is going to need business and government to lead a revolution in apprenticeships.”

Speaking on Sunday, Mr Hunt said Labour would increase free childcare from 15 to 25 hours per week for three-and four-year-olds, and would legislate for childcare support in schools from 8am to 6pm.

He also re-emphasised his commitment to teacher quality, adding that as a “first step”, all teachers “must be qualified
or working towards qualified teacher status” and go through greater training “year-on-year”.

In a direct appeal to the unions, he also committed to re-establishing the School Support Staff Negotiating Body, scrapped by the current government in 2010.

He was unable to resist a quick dig at former education secretary Michael Gove and his successor Nicky Morgan.

“Michael Gove might have been given the boot. Apparently, he wasn’t qualified for the job. But his terrible influence lingers on.

“The Tory record on education is shameful. Rising class sizes, more unqualified teachers, the tripling of tuition fees. And, now, in Nicky Morgan we have a ‘Continuity Gove’, auto-pilot education secretary.

“She is the equalities minister who voted against equality for gay marriage, and the education minister who has refused to rule out for-profit schools.

“So the message from Manchester needs to go out far and wide: only a Labour Government will ensure our schools are not privatised for profit.”