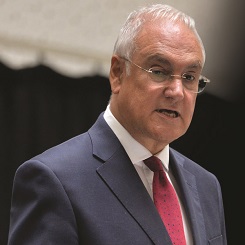 Headteachers should be legally required to establish and record the destination of pupils leaving the education system amid fears they could become radicalised, Ofsted has today said.

The education watchdog has called for an “urgent review” into what schools must record about pupils who are deleted from the school admissions registers.

“It is vital that we have a much more accurate understanding of the whereabouts of children after they are deleted from an admissions register,” he wrote.

Sir Michael urged for a requirement on headteachers to collect and record more detail about onward destinations.

We cannot be sure that some of the children whose destinations are unknown are not being exposed to harm, exploitation or the influence of extremist ideologies

“There should also be a clear requirement for schools to send these details to the local authority on a regular basis and to highlight any cases where they have been unable to obtain the necessary information.

Sir Michael said he was made aware of “potentially high numbers of pupils whose names are being deleted from school admission registers, without either the school of local authorities having an accurate understanding of where they have gone”.

He called for regulations on in-year transfers to be “urgently reviewed and considerably strengthened” to account for risks children face including female genital mutilation, forced marriage, child sexual exploitation and radicalisation.

During the school visits HMI found:

Inspectors said there was no legal duty on schools to establish and record where these pupils go.

Teachers often did not record a destination for pupils, and “in many cases noted generic reasons, for a pupil being removed from the register, such as ‘moved to Libya’, ‘gone to live with grandparents’ or ‘moved abroad’”. “This makes it very difficult, if not impossible, for schools and local authorities to distinguish the minority of children who may be at risk from the majority who will be safe and receiving a suitable education in mainstream schools, registered independent schools or in their home,” Sir Michael wrote.

A department for educations spokesperson said: “The safety of young people in our schools is paramount and we will be taking immediate steps to strengthen our guidance to schools on safeguarding and to amend the current regulations about the information schools collect when a pupil is taken off the register.