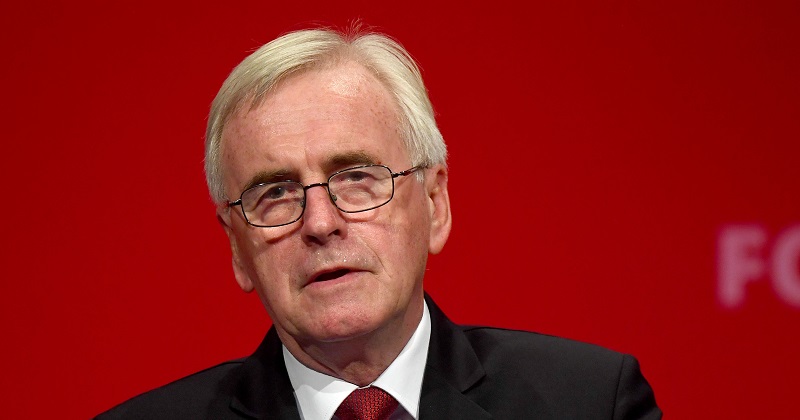 Schools will receive money from a new £150 billion “social transformation fund” under a Labour government, John McDonnell will announce today.

However, Labour is yet to say how much of the fund will be specifically for schools. The money will also pay for improvements to hospitals, care homes and council houses.

A hundred and fifty billion pounds to replace, upgrade and expand our schools, hospitals, care homes and council houses

The shadow chancellor will unveil the fund, part of which is to be used to “replace, upgrade and expand” schools, in his first major speech of the election campaign.

The announcement is part of a series of proposals aimed at boosting the north of England, although it is unclear whether the fund will also benefit schools in the rest of the country.

It is also not yet known whether the money will be capital, or a mixture of capital and revenue. The party said McDonnell will set out more details later today.

At the last election, Labour pledged to spend £21 billion on building and maintaining schools across the country over the course of one Parliament.

The party is yet to make detailed education spending announcements, but is likely to try to beat recent revenue announcements by the Conservative government, which went beyond the £4.8 billion announced by Labour in 2017.

Speaking today, McDonnell will say: “Spent over the first five years of our Labour government, the social transformation fund will begin the urgent task of repairing our social fabric that the Tories have torn apart.

“A hundred and fifty billion pounds to replace, upgrade and expand our schools, hospitals, care homes and council houses. To deal with the human emergency which the Tories have created, alongside the climate emergency.”

Labour has also pledged to establish offices of government “in each of the nine regions of England”. These will be staffed by civil servants from “relevant departments”, including the Department for Education, and governance of the offices will be overseen by boards of “county and city leaders.

The DfE already has major offices in Manchester, Darlington, Sheffield and Coventry, and a presence in other areas.

The chancellor Sajid Javid has also today set out plans to increase borrowing to increase infrastructure spending if his party wins. According to the Times, this will include spending on schools.

Javid said that by adding a percentage point to the proportion of GDP currently borrowed, “that’s about an extra £20 billion a year”.

“Over a five-year period, you can easily add another £100bn. We will set out, both in our manifesto and then, if we win, in a future budget, much more detail about what this infrastructure investment looks like.”

It follows a commitment from Jeremy Corbyn, the Labour leader, to include proposals to remove the charitable status of private schools in his party’s manifesto.

At Labour’s conference in September, delegates voted to support a motion calling for private schools to be integrated into the state sector. The motion demanded that the party close tax loopholes and even redistribute their assets.

But the redistribution elements, opposed by McDonnell and some in the shadow education team, are expected to be watered-down by the time the manifesto is printed.

Asked about the policy yesterday, Corbyn said “some of that conference policy” would go into the manifesto.

Boris Johnson has also placed his opposition to Labour’s plans to replace Ofsted at the front and centre of his campaign yesterday, as he railed against the proposals on the steps of Downing Street.

He said: “Come with us, a government that’s putting billions into education, or go with Jeremy Corbyn and the Labour Party, because that’s the only alternative, who actually want to ban Ofsted that protects kids from bullying in the classroom.”