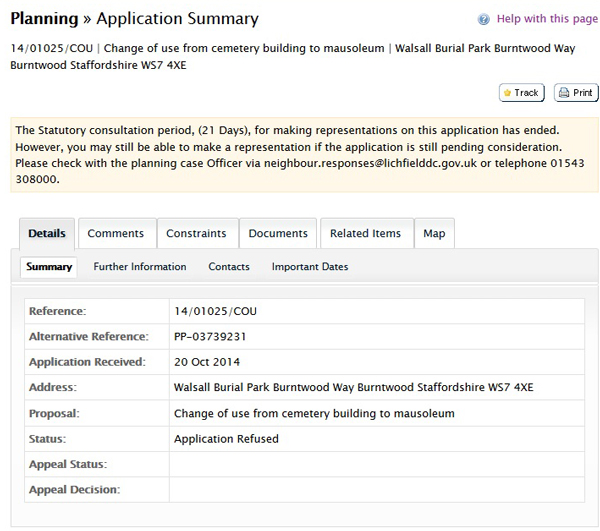 A mausoleum due to be built next to a Staffordshire secondary school has been refused planning permission after the school intervened to point out the impact of their own noisy pupils.

Burntwood Cemetery in Lichfield opened on the site of a closed hospital in 2007 and recently submitted plans to open a mausoleum next to the sports area of Erasmus Darwin Academy.

In a letter of objection, headteacher Bernice Astling warned that mourners would probably find noise levels from the school “unacceptable”.

She also said that potential complaints about the noise would be “unacceptable” as the school had been on the site for 44 years, and the sports area was granted planning permission seven years ago.

Ms Astling described how the “loud retorts” children and young people made when playing sport were “enthusiastic” and “sometimes boisterous”.

In its planning documents, the cemetery said the mausoleum setting would be “calm and tranquil”.

Lichfield District Council refused the application. “The site lies adjacent to the local school and, due to noise and general disturbance within school grounds, will not offer peaceful surroundings, leading to the likelihood of complaints against the school.”

The council said the application had not provided “very special circumstances” or a “proven need” for a mausoleum to be built on the green belt site. It was also concerned about parking.

It is not the first time schools and cemeteries have hit the headlines. In 2012, it was discovered that an Ark School – Globe Academy in Southwark, London – was on a site reported to hold 33,000 bodies. Planning law requires corpses to be removed if disturbed by a development. About 10,000 bodies were reburied in Canvey Island.

Meanwhile, in Willesborough, Kent, parents on the “school run” were earlier this year reported to Ashford Borough Council after visitors complained they were blocking the car entrance to a nearby cemetery.

Parents of children at the two schools – Willesborough Infant School and Willesborough Junior School – were also urged not to park near the cemetery after headstones were damaged.