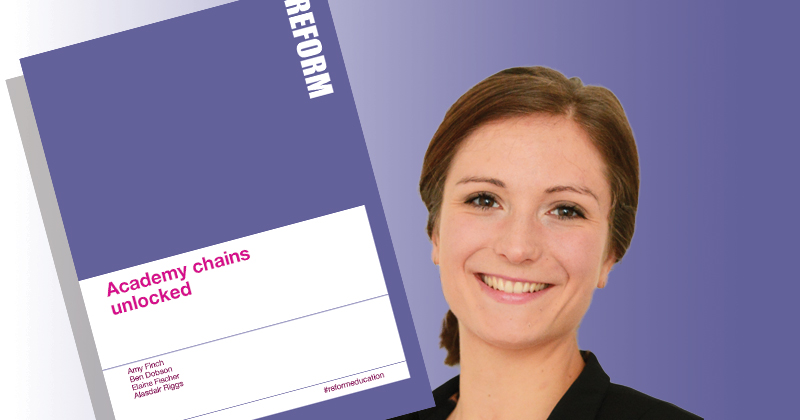 Responsibility for academy brokering and accountability should be taken away from the government and placed with a new independent schools regulator in a bid to tackle potential conflicts of interest and cronyism, a leading think-tank has said.

Reform, in its new report Academy chains unlocked, has called for the national and regional schools commissioners and parts of the Education Funding Agency (EFA), which deal with financial accountability, to form a new body that could then merge with the schools wing of Ofsted – should all schools become academies.

The report also paints a worrying picture of perceptions of trust efficiency inside the chains themselves, with 90 per cent of bosses claiming they need to take on more schools to achieve economies of scale.

Reform’s research found that both the EFA and commissioners had “considerable power” in deciding which trusts should take on academies, but that some chain bosses reported being more “in the loop” than others.

The government has previously faced criticism over close links between its officials and certain academy chains and claims that pressure was applied on some trusts to expand too quickly, leading to financial and performance issues.

Amy Finch, the think-tank’s head of education, told Schools Week that making the commissioners independent of government, in a similar move to changes in NHS England, would avoid the potential for conflicts of interest.

“There is nothing in the current school commissioning framework that prevents unwarranted favouritism of some academy chains over others,” she said. “We know that this was an issue under the coalition government, when chains already known to be struggling were asked to take on more schools.”

Transparency around the way the government links academies with sponsors has been a bone of contention for some time, and although Reform’s report acknowledges recent efforts to make the schools commissioners more transparent, the organisation has questioned whether bodies inside the government can ever be truly impartial.

The research, which included testimony from more than 60 academy trust bosses, found that “some chief executives felt disengaged from the commissioning process, while others considered themselves to be in the loop”.

The report recommended that there be “one, independent body responsible for commissioning academies” which would require a merger of the financial accountability functions of the EFA with the oversight on standards of the schools commissioners.

The responsibility for funding academies should not rest with the independent commissioner, the report said, but remain with an executive agency of the DfE. If all schools become academies, the government “should consider merging the new commissioning body with the schools wing of Ofsted, so that there is one independent regulator of all schools”.

Reform’s survey of academy trust bosses also shows a worrying collective view about the minimum number of schools needed to make chains efficient, which is especially concerning in the context of data that shows that the vast majority of trusts have fewer than 10 schools.

Of those who responded to a question about the number of schools a trust needed on its books in order to begin achieving economies of scale, more than 40 per cent said trusts would need at least 10 schools on their books to reach this point, with 20 per cent claiming they should have 20 or more.

Finch said: “Our research is the first to examine views on how large academy chains need to be before they can reduce unit costs, such as energy and back-office functions.

“Chain chief executives believe it is [on average] around 5,000 pupils, or 10 schools. In addition, 90 per cent of chains responding said they needed to be bigger than they currently are to achieve economies of scale.”

The report also recommends that school funding is given to academy chains rather than individual schools to avoid a reported “power struggle” between chief executives and headteachers.

A government spokesperson claimed all academies were subject to a “strict and transparent system of oversight and accountability” through the commissioners.

“RSCs work hand in hand with local headteachers and are accountable to the national schools commissioner,” she said. “We are confident this system ensures decisions taken are in the best interest of schools and their pupils.”