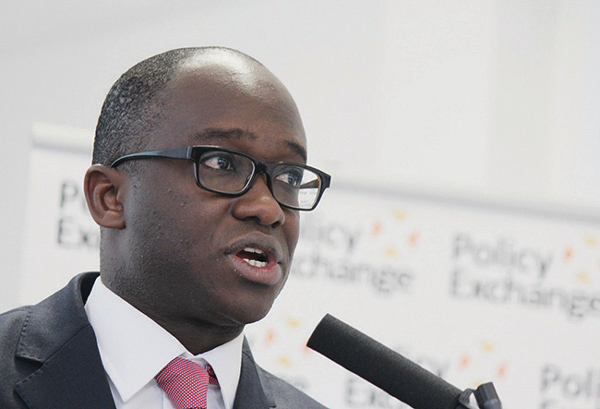 Childcare minister Sam Gyimah says the government will not step in when children’s centres underperform as it does when schools fail.

The education select committee on Wednesday heard evidence from Mr Gyimah about Sure Start children’s centres and the government’s plans for improving early years education.

Mr Gyimah (pictured), who has been in post for eight months, was told by Caroline Nokes MP that fewer than half of children’s centres were deemed “good”, and that between April and June last year just three per cent were found to be “outstanding”.

She asked: “Would you be looking at a situation where you would put children’s centres into special measures?”

Mr Gyimah said: “Local authorities are responsible for it, but you would expect to see them taking the appropriate action.”

Chair Graham Stuart pushed him further. “Failing schools are not allowed anymore. Something is done, it is taken seriously, and if we have certain patterns in a particular cluster we get minister speeches and a major rush to act and support and increase rigour.”

Reiterating that a belief in early intervention was held across government, Mr Stuart added: “Yet it seems that [when] only three per cent of children’s centres can be found to be outstanding – there’s a big shrug and you say ‘oh well, it’s up to the local authorities’.

“Well, we don’t accept that in schools and if anything the early years should be more important than schools for getting essentially just outcomes for children, which all of us want.”

After Mr Gyimah complained that the committee was interjecting each time he responded, Mr Stuart said that members were going as “gentle as they could on him”, but that he should “just answer the question”.

Mr Gyimah said that early intervention should be “taken seriously” but confirmed that local authorities were responsible for intervention in poorly performing
early years settings.

“Children’s centres are not the same as schools, they are different in different parts of the country.”

During the session My Gyimah also butted heads with Labour’s Alex Cunningham over the number of children’s centres that have closed. Mr Cunningham said the number had fallen from 3,631 to 2,861, but Mr Gyimah insisted only 124 had closed.