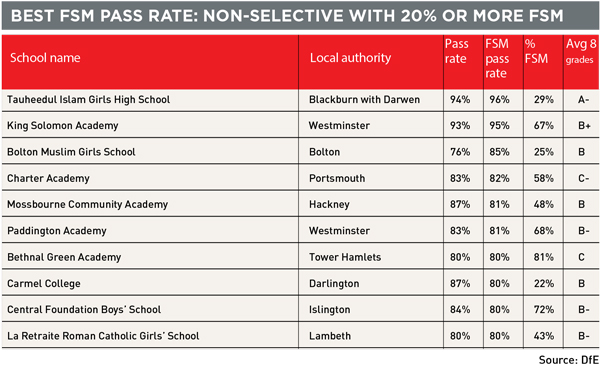 What happened so far in the GCSE results? Who has been naughty and nice about schools? Here’s all the links and news below.

You can read our take on the GCSE league tables here.

3.22pm Some of the large academy chains have taken a hit in their GCSE pass rate

1.20pm Nick Gibb, on Radio 4’s World at One, says the doubling of underperforming schools is a “transitional issue” while GCSEs change. Will Ofsted be accepting that as an official excuse? No word on that yet.

12.28pm Characteristically smart piece from FT also focuses on the plight of private schools and points out that, under new rules, Eton only received a 35% pass rate – which is below the government’s ‘floor target’ of 40%.

11.58am Awkward. DfE press release highlights ” more girls than ever before taking maths and physics at A level”. Because the worry is still girls, apparently.

11.47am @soph_e_scott now signing off, @miss_mcinerney stepping up for the lunchtime shift. I’m off to a LifeSkills event.

11.44am Education tweeter @schooldugger makes a poignant point about gender gaps in the emerging data

We need to talk about boys pic.twitter.com/Qiu6XGbaGn

11.40am – The Yorkshire Post has a full round up of the county on its website, with a good explainer about how the reforms in the league tables have impacted this year’s tables.

11.20am – Helen Barnard at the Joseph Rowntree Foundation has written a blog about the league tables. She says the gap between rich and poor is often ignored in league tables. On that note, our alternative league tables may be a start to bridging that gap.

11.05am – Nicky Morgan ‘defends’ the exam league table shake up and its impact on private schools in a piece on The Independent.

11am – Labour’s shadow education secretary Tristram Hunt has just commented on today’s league tables. He said: “Both parents and teenagers will be greatly concerned by chaos in the exam system brought about by David Cameron’s schools policy. It is taking the country backwards and threatening standards. Parents deserve to know exactly how their child’s school is performing – but under this Tory-led Government, all they’ve got is confusion surrounding school results year on year.

“Labour will reverse the damage that this Tory-led Government is doing to standards. We will end David Cameron’s unqualified teachers policy, introduce new local Directors of School Standards in all areas of the country to deliver a tough new system of local oversight for all state schools, and transform vocational education, with a new gold standard Technical Baccalaureate for 16 to 19-year-olds.”

11am – Headteacher of Cheadle Hulme School Lucy Pearson has posted a really good blog. “If there is one change I could make to the educational landscape right now, it would be to the prevalence of school league tables.”

10.42am – The NASUWT has just issued a statement about the league tables. NASUWT general secretary Chris Keates said: “Every year the Coalition Government has changed the basis on which school performance is measured. It’s unacceptable that schools, teachers, parents and children are subjected to this negative annual ritual. A recent poll of parents showed that punitive ranking of schools in performance league tables is not something on which the majority of parents rely when making judgements about a school.”

10.40am – The Manchester Evening News has found that only one school in Greater Manchester saw 100 per cent of pupils get five A*-C GCSEs inc English and maths. Good regional analysis, and a helpful tool to find out about schools in the area.

10.35am – The Independent has a piece on the ‘plummeting private school’ results as well now.

10.30am – The BBC has a list of the top 100 schools according to today’s data. Random fact: my old secondary school just makes the list at number 100.

10.10am – The Telegraph have a really nifty way of looking at the data, with some helpful explanations at the bottom. You can see GCSE data here, and A level data here. The Telegraph also has a handy guide on “how to read the results”.

10.09am – The Guardian has gone on the same line as the majority of the rest of the national media. In case you missed it from earlier, there are more than twice the number of pupils in underperforming schools than there were this time last year.

10.07am – The BBC has an in-depth piece with headteacher Helen Cassady who has turned around Havant Academy. In 2010 only 10 per cent of its pupils got five A*-C inc English and maths – last summer 50 per cent did. “It’s been challenging, but brilliant”, she told them.

10.05am – You can read the full piece by the Headmasters’ and Headmistresses’ Conference on their website here.

10am – The Telegraph has gone down the independent route. Their piece says: ‘According to official rankings, no pupils at schools such as Eton College, City of London, Marlborough, Harrow and Westminster met the government threshold of five A* to C grades, including English and maths. Many leading independent schools have been left at the foot of the tables because large numbers shun conventional GCSEs in subjects such as English, maths and science in favour alternative International GCSEs (IGCSEs).’

9.57am – The ASCL has put out a press release about today’s league tables. Its general secretary Brian Lightman said: “Performance tables should always be used with caution. They help parents to ask informed questions but they don’t give the full picture. They highlight qualifications and aspects that the Government considers important, but which may not be relevant in a school’s context. In addition, by only counting the first GCSE entry, for example, they may give a skewed picture of a school’s performance.”

9.55am – Dominic Cummings, Michael Gove’s ex-special advisor, has a blog about how GCSEs ought to have turned out.

9.50am – In all the mayhem, some may have forgotten about the A Level results. The official stats are here and here.

9.45am – Good piece here by Martin George at the Eastern Daily Press on the changes and how it has affected the region.

9.42am  – It looks like most of the national media has gone for the line about the number of underperforming schools. The BBC also has a handy infographic of the country.

9.41am  – The Local Schools Network published its take on the data, without seeing the results. Interesting read.

9.40am – More of the DfE’s publications can be found here.

9.30am – The figures are out. Here are the links to the DfE’s GCSE’s stats

9.28am – A new website for ‘alternative league tables’ is up and running. It has been set up by unions ASCL and NAHT and you can take a look at it here.

9.25am – The Independent has an interesting piece from former head of standards at the Department for Education and chief executive of United Learning, Jon Coles, today. He discusses why he thinks the league tables no longer matter.

9.20am – Information should begin to be released from 9.30am onwards. Various comments and takes will filter in throughout the day. We will be updating this page with links and commentary of what is happening.