Pupils in large multi-academy trusts are more likely to experience an “unexplained” move than their peers in other school groups, a new study suggests.

Analysis by the Education Policy Institute (EPI) found academy trusts with at least ten secondary schools all have above-average rates of unexplained exits, prompting calls for an investigation into their practices.

The EPI found that about one in ten pupils who reached year 11 in 2017 experienced an unexplained exit at some point during their secondary education, up from 9 per cent in 2014.

High exit rates were evident in trusts and across local authorities – with one having six times the average rate (see table).

Of the pupils who left school for an unknown reason, just 4.4 per cent returned to their original school by the spring term of year 11, while 51.9 per cent ended up in an unknown destination.

The study is the EPI’s second large-scale piece of work on pupil movement, and seeks to get to the bottom of trends in exclusions and off-rolling.

David Laws, the former schools minister who now heads EPI as its executive chair, said the figures were “disturbing”. He urged the government, Ofsted and school leaders to “look closely” as those with the worst records.

“Almost half these children fail to return to mainstream schools and it is concerning that the government has so little information on where many of them end up.

“While it is clear that this is an issue across the schools system, it is notable that in some school groups children are from twice to six times more at risk of an unexplained move than the average.”

But Leora Cruddas, chief executive of the Confederation of Schools Trusts, said that “although the data in the report may look concerning, it is important to note that moves to Alternative Provision are included in the ‘unexplained exits’ where they are not driven by a permanent exclusion”.

In April, the think tank revealed how nearly 50,000 pupils in a single year group were removed from school rolls for “unexplained” reasons.

It has now revised that figure to more than 69,000 after changing its methodology to include pupils previously excluded because they were thought to have left for “family reasons”, and following a technical change to how some moves are classified.

The study concluded that unexplained exits were “not a problem that is most prevalent amongst a particular structure of school governance”.

However, larger MATs were the only group to have above-average rates of unexplained exits, leading to questions about their methods. These trusts, bar Delta and Harris, also have high levels of permanent exclusion.

The new study also looked at how many of the exits could count as “managed moves” – where pupils are moved in an arrangement between schools and their local authority without the need for a formal exclusion.

Mary Bousted, the joint general secretary of the National Education Union, which sponsored the study, said: “It calls for further investigation that large multi-academy trusts, many of whom have been lauded by government for vastly improved results, have higher than average unexplained exits.”

A government spokesperson said: “While we back head teachers in having robust behaviour policies and to use permanent exclusions as a last resort, we are clear that it is against the law to remove pupils on the basis of academic results. Any school that does this is simply breaking the law, but unexplained pupil exits is not the same as off-rolling.

“As this report highlights, the increase in unexplained exits is small and there are not large differences between exits in Multi-Academy Trusts and Local Authorities, and we will continue to work with Ofsted to tackle off-rolling in any setting.” 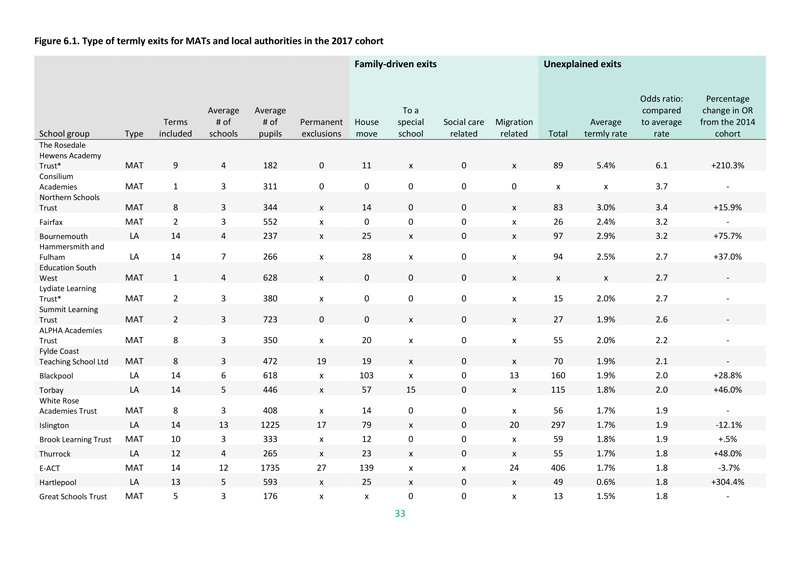 A spokesperson for Consilium trust, which has eight schools and was ranked second, said its actual number of unexplained moves was not included in the analysis as it was “less than ten pupils and therefore not statistically significant”.

“This report was a real opportunity to understand the extent of the issue, which is why we are disappointed with how some of the report’s conclusions have been reached,” it added.

Consilium said it had a net gain in its year 11 cohort as more students joined than left. “Compiling such tables could actually be detrimental to genuinely supportive approaches to keeping children in education rather than permanently excluding them.”

Meanwhile Roger Pope, the chief executive of Education South West (which also had fewer than ten moves), said it was “disappointing EPI has failed properly to interrogate the data and drawn false conclusions”.

He said every year a high number of pupils left two schools at the end of year 9 to join a neighbouring university technical college. Ofsted had praised the inclusive nature of their schools – with one last year admitting 27 pupils in-year from other schools in the area.

Catherine Anwar, the chief executive of Summit Learning Trust, said it “doesn’t tolerate or allow any ‘off-rolling’ in any of its academies”.