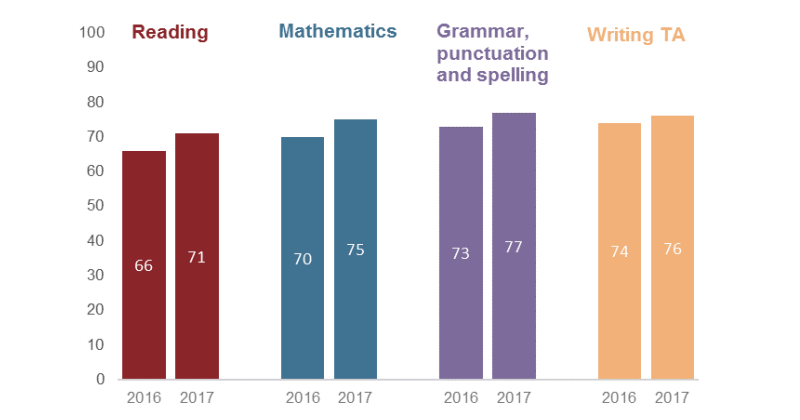 Sixty one per cent of pupils achieved the government’s “expected standard” in reading, writing and maths in this year’s key stage 2 SATs, up from 53 per cent last year, interim results published by the government show.

In reading, 71 per cent achieved the standard, compared to 66 per cent last year, while 75 per cent met the standard in maths, up from 70 per cent.

In spelling, punctuation and grammar tests, 77 per cent of pupils met the expected standard, up from 73 per cent, and the proportion meeting the standard in writing was 76 per cent, up from 74 per cent.

The government has also published the marks pupils needed for the 2017 key stage 2 tests to achieve the government’s “expected” scores. You can read about them here.

Schools minister Nick Gibb says the results show “sustained progress in reading, writing and maths” and are a “testament to the hard work of teachers and pupils across England”.

“Thanks to their commitment and our new knowledge rich curriculum, thousands more children will arrive at secondary school having mastered the fundamentals of reading, writing and maths, giving them the best start in life,” he said. The results published today are only interim, and we will not find out how many schools have fallen below the government’s floor standards for SATs until the final results are published in December.

However, school leaders have called for caution over the results, urging people not to judge schools on SATs results alone.

“Currently, the methods to hold schools to account aren’t as fair or as reliable as they should be,” said Russell Hobby, general secretary of the National Association of Head Teachers.

“SATs data only gives parents part of the picture when judging a pupil’s success or a school’s effectiveness. League tables are the least helpful way of knowing if a school is the right place for your child.

“At the moment, parents and schools know that these results have to be taken with a pinch of salt. This can’t be right. Just looking at data misses the majority of the real work that schools do to help young people achieve their full potential.”

Julie McCulloch, primary specialist at the Association of School and College Leaders, congratulated schools, teachers and children on the results, but said her organisation has “grave concerns” about the impact of SATs on the curriculum and children’s “broader experience” at primary school. “It cannot be right that the performance of primary schools is judged on a set of tests taken over just four days in May at the end of the seven years children spend at primary school.”

Allana Gay, deputy headteacher at Lea Valley primary school, said the changes to scaled scores were “significant” for any examination paper, and welcomed the NAHT’s call for calm.

“It seems that the assessment is going through a phase of finding where the standard lies,” she told Schools Week.

“Either that or schools have quickly adjusted to the new assessment and are being defeated by the bell curve. Good to hear the NAHT urge the public to be cautious with the results. Will need far more years of settling before it can become the reliable information source that is needed.”

It follows a chaotic year for primary testing in 2016, during which the system was plagued by issues stemming from new, harder tests and other problems like the high-profile leak of a test paper that led to an investigation into the work of the Standards and Testing Agency.

It also comes after Schools Week learned that the STA made the questions early on in this year’s tests for 10 and 11-year-olds slightly easier after reports that last year’s tests left pupils in tears.