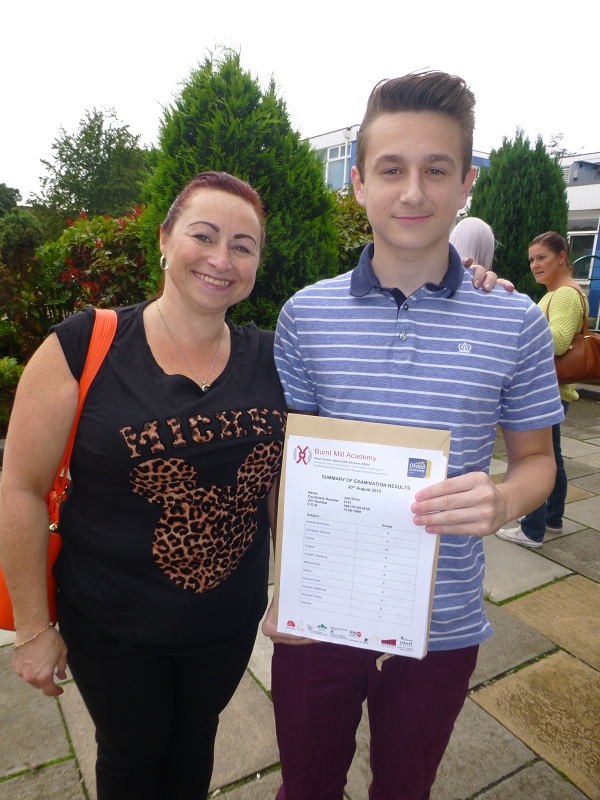 A cancer diagnosis earlier this year did not stop Joe Sims from achieving nine A* and A grades at Burnt Mill Academy.

The brave 16-year-old found a lump in his neck in February and feared his chances of succeeding in the summer’s exams had been ruined.

He was diagnosed with a rare form of Hodgkins lymphoma in April, which meant the lump had to be removed immediately and Joe was given the all-clear.

However, a second lump soon appeared which has this month been confirmed as cancerous and so he now faces a bout of chemotherapy.

Despite his health battle, Joe picked up these outstanding results from the Essex school.

He said: “I was not expecting these results at all. I was expecting to get through, but not exceed like this. I am feeling pretty good.

“It has all been a bit of a blur. I was told I would be having chemo and would miss my exams so I did take my foot off the pedal for a while. I cared more about my health than the grades at the time. I have tried to get on with things as much as possible. Everyone has been really supportive which has been really important to me.”

Head of school John Blaney said: “We are just so proud of Joe. His strength of character and determination has got him through. We are proud of all of our students, but especially so of Joe with everything he is going through.”