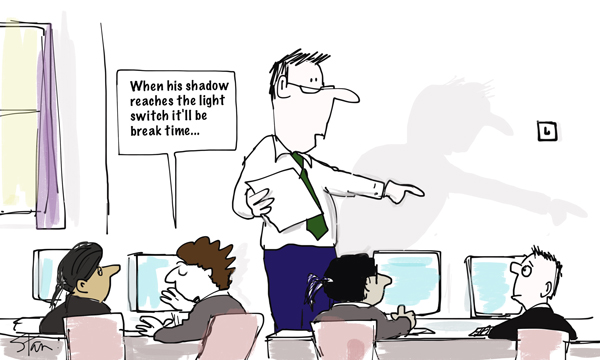 The clocks have stopped at one university technical college in a bid to make pupils more “professional and business-like”.

Kate Tague, the principal of Coventry’s WMG Academy, decided not to install clocks in any of the school’s classrooms to create a more realistic working environment.

The 14-19 UTC opened in September and is currently 70 per cent full, taking in pupils in years 10 and 12 only at present.

It bucks a national trend for low pupil numbers at UTCs. Schools Week’s sister paper FE Week revealed in April that six of the 30 open UTCs are only a third full.

Mrs Tague said all pupils were encouraged to bring in their own devices – mobiles, laptops or tablets – for school work and to let them know the time.

“We want the pupils to take responsibility for themselves. Most businesses will not have a clock on the wall, but you will use the clock on your computer or phone.

“We are very much business led. How do you get to work on time? You use your watch, or your mobile, to figure out how long it will take you to get somewhere and you plan accordingly.

“We want the pupils to have that same attitude.”

She said about 50 per cent of pupils wore watches, and the other half used their mobile phones.

The school also did not use bells to mark the end of lessons and during classes, pupils were encouraged to use their phones or laptops to Google and to take pictures of the board for future reference.

A study published by the London School of Economics last month found test scores increased by more than 6 per cent in schools that banned phones.

But Mrs Tague said mobiles were “unavoidable these days in the classroom. We think this is the best way to harness the technology. Of course, sometimes students will misuse the devices.

“It is not necessarily something every school can do. We have nowhere near the amount of pupils a normal secondary school will have, and we are new, so we can cope with people using our wifi all at the same time.”

UTCs offer technical education alongside core subjects. WMG specialises in engineering and has an intake of 80 per cent boys, although Mrs Tague said it had the highest proportion of girls studying engineering in the country.