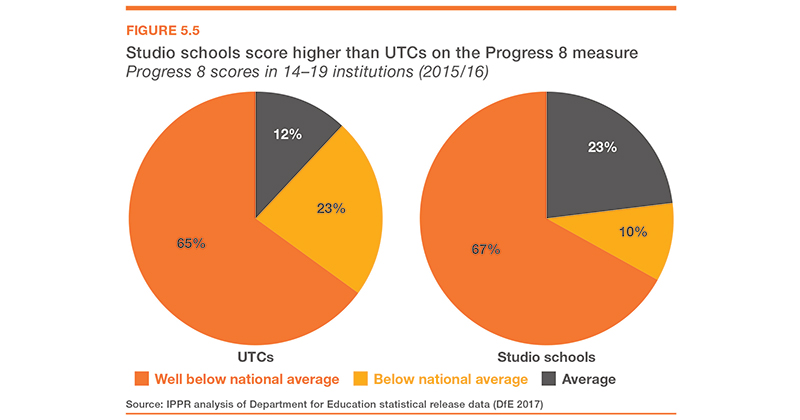 Ailing university technical colleges should be converted into 16-19 colleges, with all studio schools joining multi-academy trusts to stave off closure, says a new report.

A major study by the Institute for Public Policy Research (IPPR) has uncovered fresh concerns over the 14-19 schools.

The report found that while UTCs attracted a comprehensive year 10 intake similar to the national average, their league table performance was “significantly below average”.

Two-thirds also ranked in the bottom 10 per cent of schools nationally for Progress 8.

Meanwhile, studio schools appear to be “leading to the ‘tracking’ of disadvantaged and low-attaining pupils”, the report said.

Craig Thorley, senior research fellow at IPPR, said despite the government championing both school types, the institutions were not “working for pupils, and face too many barriers to being successful”.

The findings follow several investigations by Schools Week, the most recent of which showed that established UTCs were still more than half empty.
The IPPR wants a ban on any new UTCs or studio schools, instead calling for them to become “high-quality providers of technical education” for 16 to 19-year-olds.

The report says any new UTC should have this “revised remit” with existing UTCs converting unless they had a “record of high performance”.

The IPPR said existing studio schools should be required to join a local multi-academy trust with a more “readily available” pool of pupils “to safeguard their future viability”.

To save the UTC programme, these schools should be converted to post-16 providers

Thorley said: “The next parliament will see a greater commitment to technical and vocational education to form part of a modern industrial strategy post-Brexit.

“To save the UTC programme, these schools should be converted to post-16 providers able to deliver high-quality technical education in line with the needs of young people and the economy.”

The report said this could help to “plug the gap” in specialist technical 16-19 provision needed to deliver the government’s new T-levels, a technical alternative to A-levels where students can study a course in 15 sector areas.

The IPPR found that the pupil intake at UTCs – based on deprivation, disadvantage and prior attainment – “broadly matched” the national average.

Despite this, in 2015-16 an average of 35 per cent of UTC pupils achieved five A* to C grades, including English and maths, compared with a national average of 54 per cent.

Just 10 per cent of UTC pupils were entered for the EBacc in the same year, with 3 per cent achieving it – compared with a national average of 37 and 23 per cent respectively.

Charles Parker, the chief executive of the Baker Dearing Educational Trust, said students were educated elsewhere at key stage 3 and “have often made little progress when they join a UTC”.

Parker said the trust, set up to promote the concept of UTCs, was proud of the progress pupils made during key stages 4 and 5. “The evidence for this is the outstanding destinations of UTC leavers.”

On studio schools, the report found the number of pupils achieving five A* to C grades, including English and maths, was 26 per cent in 2015-16. Just 6 per cent entered the EBacc, with 3 per cent achieving it.

The Conservative manifesto made no commitment to expanding UTCs, a stark contrast to the 2015 manifesto.