Academy trusts looking to take over scandal-hit schools have been asked to sign “gagging orders”, an investigation by Schools Week can reveal.

This newspaper has seen a non-disclosure agreement (NDA) signed by a trust involved in taking over a school. The NDA insisted none of the information gained during due diligence could be made public for two years. It suggested any breach of the agreement would be dealt with by legal injunctions.

It also emerged this week that Rachel Mallows, chair of the Education Fellowship Trust (TEFT), had asked trusts to sign an NDA before they were given access to the details of the 12 schools being rebrokered following its collapse.

You might discover a contract had been agreed on the golf course in breach of the tendering rules. In theory, you couldn’t do anything with that information

It was the first trust to give up all of its schools, and some of the takeovers were delayed for months.

The Department for Education said it was not “unusual for trusts to sign confidentiality agreements during the due diligence process to protect sensitive information, including pupil data”.

However, academy leaders contacted by Schools Week had not heard of the practice. But one that had said they can lead to difficulties.

The senior executive, who we are not naming, said: “You might discover a contract had been agreed on the golf course in breach of the tendering rules. In theory, you couldn’t do anything with that information.”

However, one trust did tell Schools Week they had blown the whistle after finding a six-figure contract had been handed out without going to tender – despite signing an NDA.

Regional schools commissioners also seem to be aware that such agreements, also called “gagging clauses”, are being signed in controversial rebrokers.

In an email from 2017, released under FOI this month, Martin Post, the former regional schools commissioner for north-west London and south-central England, queried delays in the rebrokerage of TEFT schools. He was told by Mallows: “We have a delay with Lion Education Trust, who are questioning the NDA… No other interested sponsors has queried this.”

The rebrokerage of TEFT schools took more than a year, with schools distributed between five academy trusts.

Schools Week reported in 2018 that delays to the rebroker process had resulted in additional legal costs and central funding needed from the government.

A tribunal last year forced the DfE to release the emails (see below).

Schools Week approached the five trusts to ask about NDAs. One of the trusts, which asked not to be named, said it didn’t sign an NDA. The other four either refused to comment or did not respond. 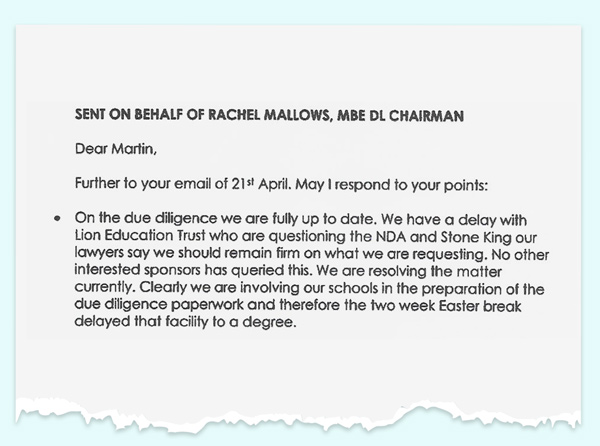 TEFT, co-founded by Johnson Kane and  Sir Ewan Harper, an architect of academies policy under Tony Blair, gave up its schools following financial issues and concerns over poor outcomes for pupils.

Martyn Oliver, chief executive of the Outwood Grange Academies Trust, warned that due diligence is “all about shining a light on all of the practice in the school, not to cover things in darkness”.

“Ultimately, the system should be about supporting and sharing, but NDAs should never have anything to do with stopping people whistleblowing about failures or safeguarding issues.”

But he added it was “understandable” to use such agreements to protect commercially sensitive information and intellectual property. Many businesses use NDAs for this reason.

The government has shelled out more than £30 million in grants to entice new academy trusts to take over hundreds of failing academies since 2013.

Critics say the process is not open to public scrutiny, with regional schools commissioners deciding which trusts take over schools in meetings that are closed to the public.

Schools are often rebrokered when they have been rated ‘inadequate’ and their trust has been judged unable to drive improvement.

He pointed out that trusts and their staff are public servants, meaning they are bound by the “Nolan principles, one of which is openness”, adding: “There are potentially damaging consequences if an NDA is being misused in order to hide a problem or brush it under the carpet.”

However, the use of NDAs in relation to departing staff has come under scrutiny. Former academies minister Lord Agnew said last year he was worried about their “endemic” use in the public sector, adding that they were “not a good thing when public money is involved”.

Figures obtained by Schools Week last year showed their use was increasing in some academy trusts.

The Department for Education said: “The decision to draw up an agreement to protect information is a matter for individual trusts and the department would not be involved in this process.”

The Department for Education failed to release 11 emails relating to the Education Fellowship Trust that a tribunal ordered to be provided because the department had lost them.

The government was forced to release details that proved it did not vet the trust’s founder, Johnson Kane, after it was taken to court.

The Times, which first revealed the findings, reported that Kane, 67, claimed he was high up in the John Lewis Partnership and was put on the board of the British Airports Authority by the government when he co-founded the trust in 2012.

However, he had only worked on the sales floor at a John Lewis store and lied about his qualifications to get a job with BAA. The Times reported he was never on the board, but did work for 18 months as a commercial service director.

The tribunal also ordered the government to publish emails relating to the proposals to tackle poor performance at the trust, which has now collapsed, after a contested Freedom of Information request.

The emails were mainly between Martin Post, the then regional schools commissioner for north-west London and south-central England, and the trust.

According to the DfE, the documents were lost between September 2017, when the FOI was submitted, and February 2018, the date of the DfE’s internal review of the FOI request.

The emails were all sent around the time the trust was being closed down. Nine of the missing emails were sent in April 2017. There are no details about the content of the emails.

The government’s legal department said the DfE had conducted an in-depth search for the documents, but they had not been found.

Solicitors that acted for the trust were contacted by The Times.

Reporter’s take: how I got the DfE to ’fess up

The Department for Education did all in its power to keep secret the details of its failure to vet Johnson Kane, co-founder of the Education Fellowship Trust, writes Geraldine Hackett.

Kane was paid £160,000 as chief executive of the trust that ran 12 schools for six years. However, his tenure, and the trust, came to an end when five schools were deemed to have failed and two had massive debts.

I had submitted a Freedom of Information request in September 2017. I asked for information on the background checks carried out by the government on Kane (when his trust got approval to open in 2012) and information on proposals to tackle the poor performance of the Education Fellowship Trust.

The DfE refused to release the information, claiming it was not in the public interest. The information commissioner also refused my appeal, meaning the next step was an information rights tribunal.

Just weeks before it started, government lawyers notified me they would be applying to have a witness statement thrown out on the grounds that it breached Kane’s human rights.

John Mills, a former senior executive at the British Airports Authority, had known Kane when he was employed by the company as a commercial services manager. Mills had discovered that when Kane had applied for the job he had lied about his school, his qualifications and his previous employment.

His witness statement was the key to the case – that Kane was a liar and was not qualified to run schools – and the DfE should therefore reveal what checks had been done on his background.

The judge, Anisa Dhanji, ruled that Mills’ statement be allowed and the hearing went ahead in June last year.

The DfE’s case was led by Christina Michalos, a prominent media QC. With her were two government lawyers and two FOI compliance managers.

The DfE’s case was that confidence in the education system would be undermined by the release of the material.

The judge also said it was “unhelpful” the opinion of former academies minister Lord Agnew, who signed off the refusal decision, was “as brief as it is” with no attempt to explain what prejudice would be caused by releasing the information.

The wheels of challenging FOIs can turn very slowly, but sometimes you win.