An academy trust founded and once chaired by the academies minister received a softened report from Ofsted after inspectors returned just four months after a damning inspection.

Irate union leaders have now suggested the school got “a rehearsal before the real deal”.

The Inspiration Trust, which runs schools across Norfolk and was chaired by Lord Agnew until last September, complained to Ofsted after inspectors wrote a highly critical report on Cobholm Primary Academy.

This raises serious concerns that Ofsted is not completely independent

Ofsted’s sacrosanct independence is now in question just as Damian Hinds, the education secretary, has promised that Ofsted judgements alone will form the basis for future performance interventions in schools, including forced academy conversions.

Inspectors first visited Cobholm in September, but were unimpressed by pupil attainment data.

A Freedom of Information request for the inspection notes reveal that one inspector – whose identification number is redacted from the documents – disagreed with the head’s view that the school was “good in all areas”.

Official figures show the school, which joined the trust four years ago, had pupil progress scores in the bottom nine per cent of schools for reading and maths last year.

In the notes, the inspector suggests leaders might have been “spinning figures to present the best possible view”. 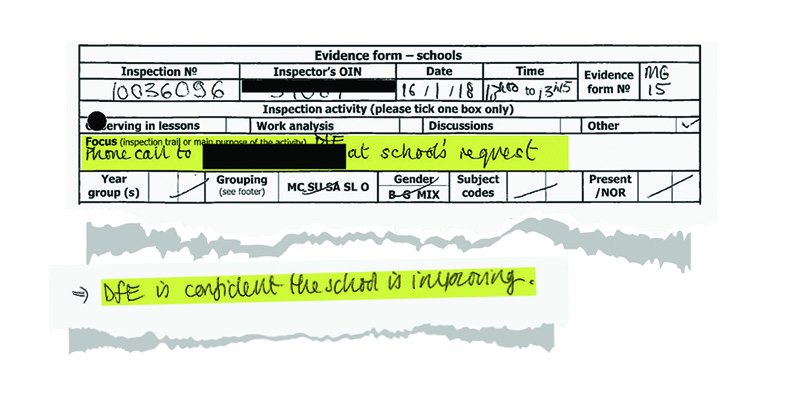 But when trust staff* were shown the draft inspection report, as is standard after an inspection, they disputed “factual errors”, “gaps” in evidence and “what was felt to be a bias” against the school’s teaching and curriculum methods, according to an Inspiration spokesperson.

When Ofsted considered the complaint as part of its quality-assurance procedure, it decided the evidence was incomplete and, in line with published policy, decided to return for an “additional visit”, confirmed the inspectorate’s spokesperson.

Notes from the second visit are written in different handwriting to the first, and the inspector wrote more positively about the school, praising “the core knowledge approach” and leaders’ “clear vision”.

One page from the second visit set of notes states there was a “phone call to the DfE, at the school’s request”.

Inspiration claimed that a member of regional school commissioner Sue Baldwin’s team gave evidence at both the September inspection and the January inspection by phone call.

The RSC representative felt the school’s data was “disappointing” but that it had “transformed” since joining the trust. Overall, the “DfE is confident the school is improving,” noted the inspector.

There are no documents in the first inspection notes showing any discussion with the RSC’s office, although many pages are heavily redacted.

Lord Agnew, who is now academies minister, had chaired the trust since it was founded, quitting only when he took up his ministerial role in September. There is no suggestion he was involved in the discussions about Inspiration’s performance at the inspection.

Kevin Courtney, the joint general secretary of the National Education Union, has demanded an investigation into the involvement of the RSC’s office into the inspection because it “raises serious concerns that Ofsted is not completely independent.”

His words were echoed by Mary Bousted, his co-leader, who said the outcome of an Ofsted inspection should not be dependent on “how confident or savvy the leaders are in challenging the judgment”.

“The Inspiration Trust has been given a rehearsal before the real deal here.”

In February, Ofsted published a report which graded Cobholm ‘requires improvement’, with ‘good’ for leadership and management, and early-years provision.

Colin Richards, a former Ofsted inspector, said schools should have an opportunity for “redress”, but warned smaller schools tend not to seize the opportunity.

Both Inspiration and Ofsted said the inspectorate had acted in line with their own protocols.

In a separate tweet, Ofsted’s national director of education Sean Harford has estimated about 40 schools get additional inspections a year.

It was also “quite normal for the RSC to [offer a view] as part of a wide range of evidence Ofsted would consider,” added Inspiration’s spokesperson.

*This was changed from ‘trustees’ to ‘trust staff’ to make clear that the trust board were not involved in reviewing the draft inspection report.