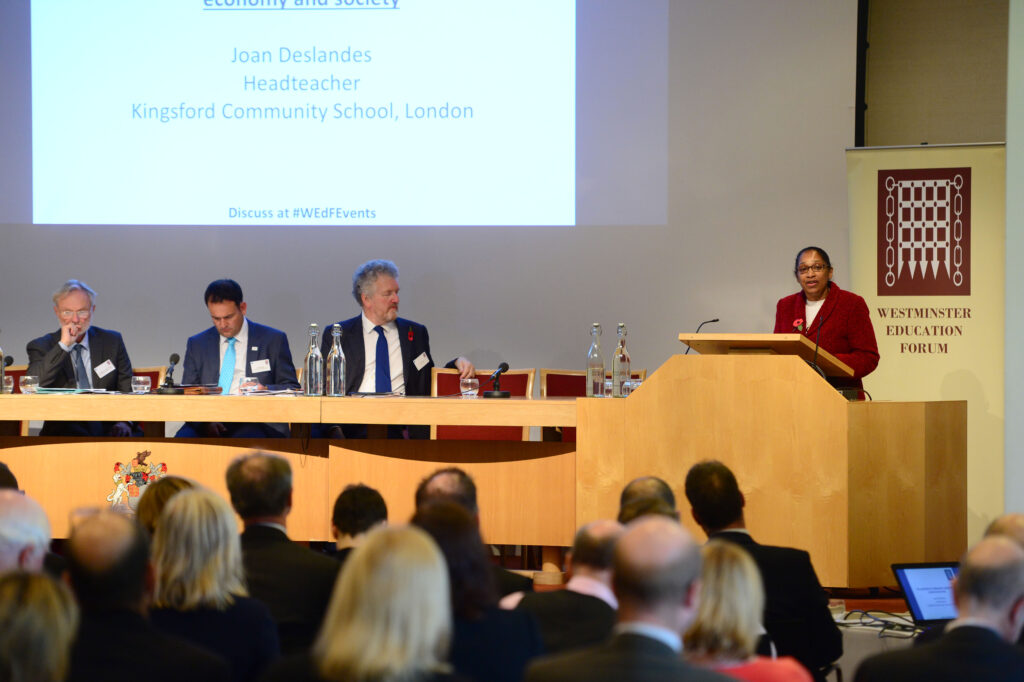 This morning more than 100 people from independent, and state, schools gathered to discuss the future of the independent school sector.

The event, hosted by Westminster Education Forum, was designed to debate the issues the sector was facing now, and over the coming years.

Subjects discussed included the contribution of independent schools to the economy and society, curriculum freedoms, overseas expansion, the use of technology in the classroom and best school design.

Below, we look at some of the biggest talking points from the forum.

1. Partnerships with state schools are a good way for independent schools to get involved in the wider community

Joan Deslandes (pictured above), headteacher of Kingsford Community School, in London, spoke of the value of the partnership with her state school and independent Brighton College.

“It has mutual benefits and it is a model that other schools in the borough are now doing with other independent schools.”

2. But the sector doesn’t think the government is aware or very supportive of what is already being done

Stephen Smith, secretary of the Forum of Independent Day Schools, said: “I think politicians generally put up with us, and by doing what they are doing threaten us more by what they are avoiding doing. They are not involved. I believe what we actually want is more positive involvement from all parties to engage.”

Indendepent Schools Council chairman Barnaby Lenon added: “We don’t have many supporters in any political parties. This government, who I think would be our natural supporters are keen on One Nation and regard us as a bit of an issue when it comes to social mobility, so even within this government I think it is difficult.

“But I think partly I think it is ignorance of what we do in ISC when it comes to working with state schools and partnerships. There are still far too many politicians who think that independent schools are in an ivory tower and don’t do anything with the state sector – which is very far from the truth.”

3. Recruitment is an issue in independent schools, too

The use of unqualified teachers was supported by panellists as a way of increasing the number of teachers in schools.

He said:  “We have to make it really easy for people to leave a job one day and walk into teaching the next day on a reasonable salary. And then be supported from there.

“It’s getting rid of the barriers. Because if you say to somebody that you can leave a nice banking job and become a teacher, but by the way you are going to have to spend a year doing a PGCE and it’s going to be very hard, I think there’s an enormous barrier to recruiting more teachers. So it’s just making it really easy for people to give it a go.”

4. Could a Teach First-esque model be rolled out in independent schools to aid recruitment?

Attendees and panellists were approving of the impact Teach First has had on graduate recruitment into the profession.

Lord Griffiths of Burry Port said it has “livened up” the teaching profession and suggested people could think about developing a similar model.

“We are quite disappointed that we can’t reach the Teach First pool of graduates,” said Andrew Pearson of Colfe’s School, which has its own teacher training system.

The HMC Teacher Training scheme was given as an example of a current model for recruitment and training.

5. Finally, it was noted by attendees and panellists that there was a lack of diversity represented at today’s event

Lord Griffiths of Burry Port, who chaired the first four discussions, highlighted this in his closing remarks. The Labour peer, and chairman of the Central Foundation Schools of London, said: “Perhaps the organisers will take on board one thing, that causes me a bit of anxiety. There were nine contributors, including myself, and eight were male and one was female. All were white. Six were Oxbridge graduates. Now I score in all those categories, so it is not personal to anybody.

“But diversity is not a bad thing and it would be very nice to see a bit more of it out there, than I do. The independent sector can’t be independent of the social trends of the country, or the demography, and all the other things and it would be lovely to see some people answer that category.”

Five of today’s 20 speakers were women, and only one was BME.